Originating from medieval codes of chivalry, the art of duelling persisted in the 19th century. Although the classic sword or rapier was replaced with pistols, both weapons continued to be used till the end of the 19th century. Because a lot of promising army officers were killed in duels, the army disencouraged participating in duels.  Duelling was illegal and therefore mostly fight at dawn. Killing an opponent was regarded murder but was punished mildly. However, most duels were fought to first blood after which the code of honour was restored.

In 1787,  the Chevalier de Saint-Georges, the son of an African-American slave who was raised in Paris and became a gifted violist and fencer, was invited by the prince of Wales to a visit including some fencing duels. He was matched with an even more intriguing character, the Chevalier d’Eon. This French diplomat who disguised as a woman to spy on the Russian court, had to seek asylum in London and requested to be formally acknowlegded as a woman, starting from 1777.

Besides its use in a duel, fencing was also practised as a sport by both man and woman. Jean Beraud, famous for his portrayal of the Paris society, portrayed a female fencer, a so called escrimeuse.

In Germany,  a special sort of fencing was practised by university students which was called mensur. Scars from a mensur duel were regarded as trophies. mostly on the left side of the face, where blows would fall from a right-handed duellist. The duellist were to stand with body protection and goggles with steel noseguard on their positions without dodging, aiming to hit the unprotected areas of their opponents face.

In Russia, duelling was immortalized by the poet Pushkin. In his story about the dandy Onegin and his neighbour poet Lensky, he describes a duel between the two of them. Ilya Repin painted this scene in watercolours. In the duel, the second of Lensky, did not try to prevent the duel which is the most important task of the second. Even after Onegin oversleeps the duel and arrived one hour too late (this was a reason for losing a duel) , the second does not declare Lensky the winner and pursues the duel with fatal consequences for Lensky. Lydia Timoshenko, a 20th century Russian painter, also illustrated this moment. 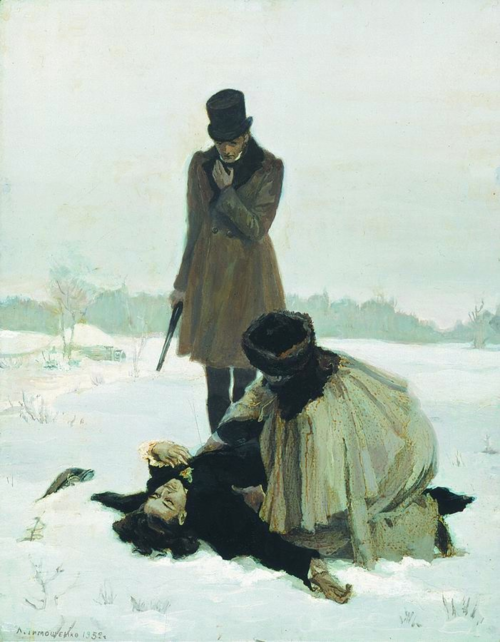 However, things did not stay in the realm of fiction. Pushkin, having fought 28 duels himself, was challenged by the French diplomat Georges-Charles de Heeckeren d’Anthès in 1837. His opponent fired first, hitting Pushkin in his stomach. Pushkin managed to return a superficial wound to the arm of his opponent, but his own wound proved to be fatal within 48 hours. 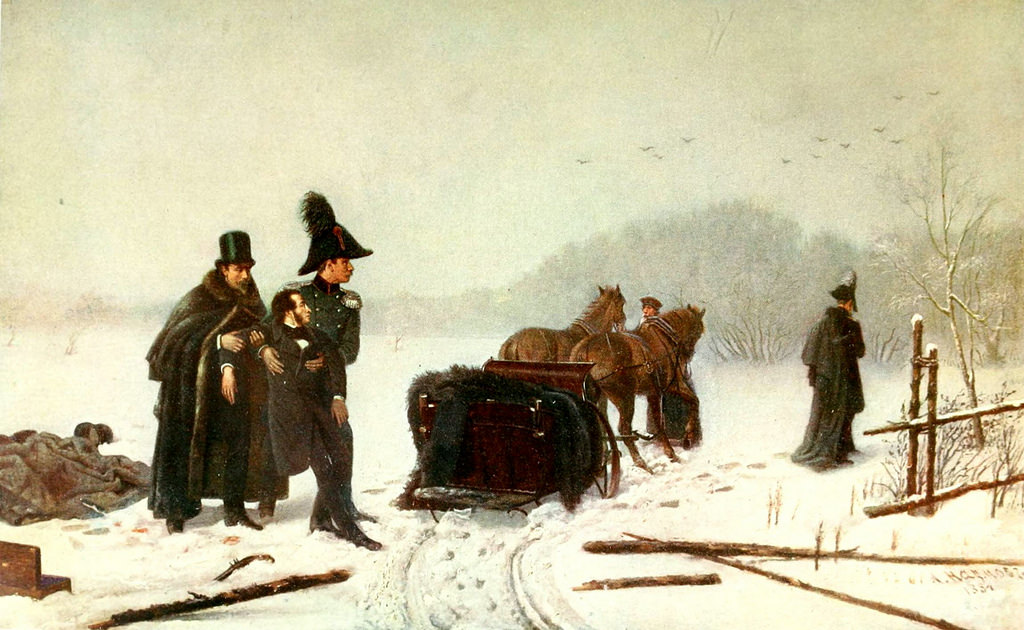 Emile Antoine Bayard entered the 1884 Salon with a painting about a rapier duel between two women on well known spot in the Bois de Boulogne. The painting became famous and travelled the world, stimulating the artist to make a sequel “the reconciliation” in which the opponent kneels beside the wounded female to comfort and in which the second is waiving for the distant coach to arrive at the scene. 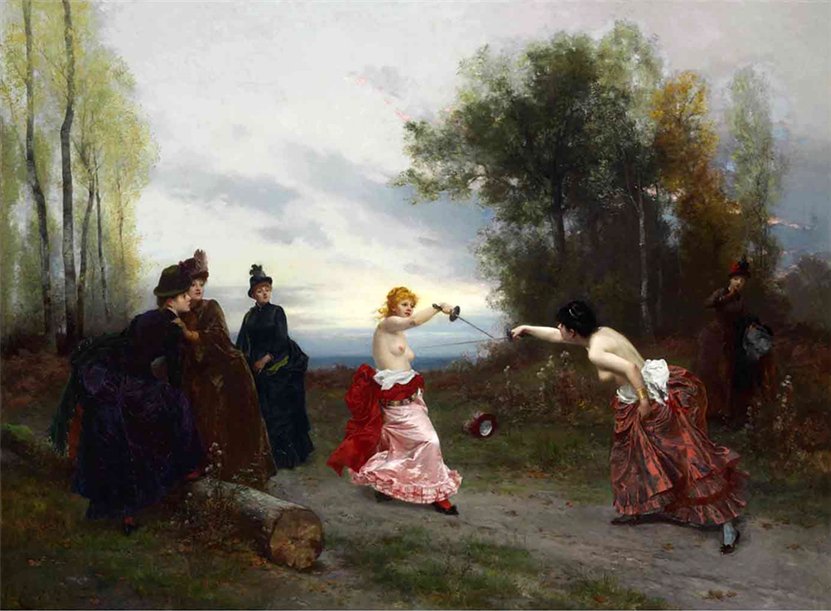 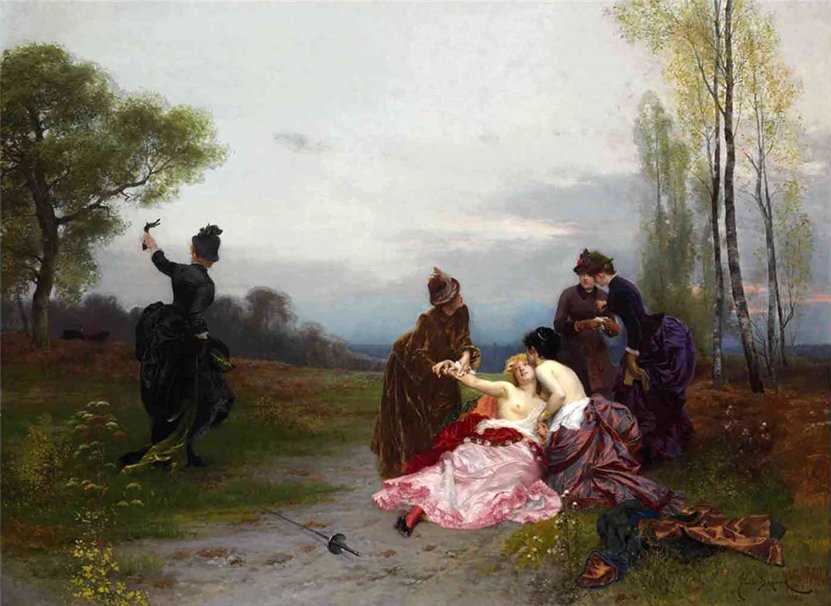 A famous historical example of such a duel happened in August 1892 in Liechtenstein. Two Austrian noblewomen, Princess Pauline von Metternich and Countess Kielmannsegg, fought a duel because of an argument for floral arrangements for the Vienna Musical and Theatrical Exhibition.  For medical assistance the ladies asked Baroness Lublinksa who insisted on fighting topless to avoid septic wounds from contaminated clothing.

Jean Leon Gerome also painted a duel scene. In the Bois du Boulogne, a mortally wounded pierrot, sinks in the arms of his seconds. The painting started a lot of speculation about which incident Gerome had used as his inspiration, illustrating the frequent occurence of duels in Paris during the 19th century. Also the Italian Mancini illustrates that duelling was not just an innocent gentlemans play but a deadly serious business. 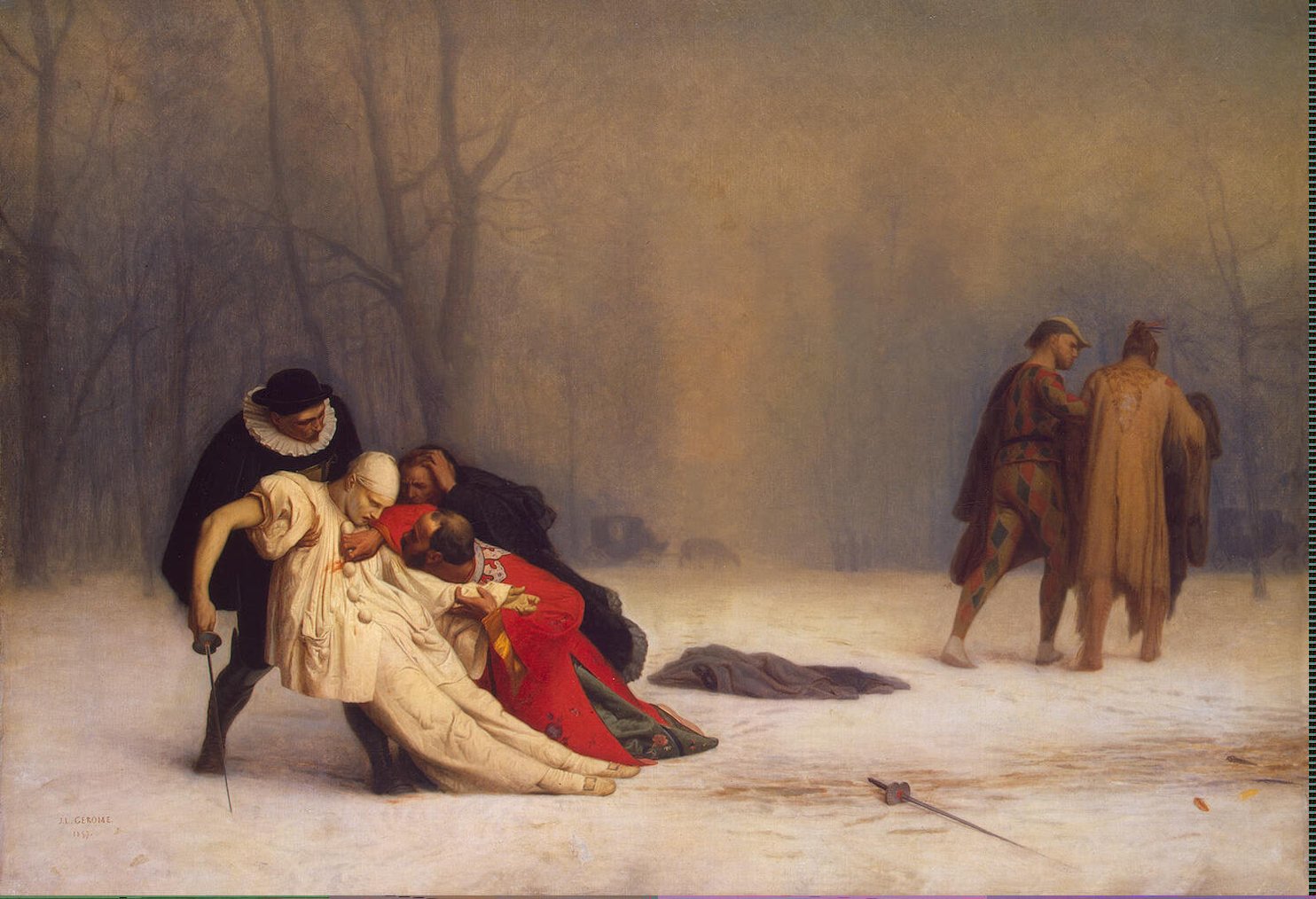 The duel after the masquerade, 1858, Jean Leon Gerome 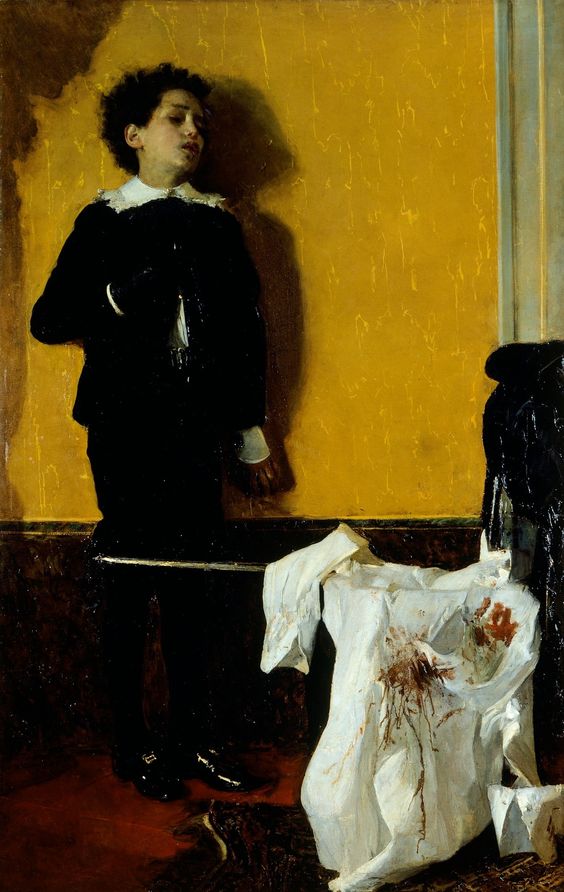 After the duel, 1872, Antonio Mancini

To end this guided tour, an extra-ordinary duel which was fought in the air must be mentioned. In 1808 Monsieur Granpree and monsieur Le Pique, became opponents in an argument about a woman who turned out to be a real femme fatale. 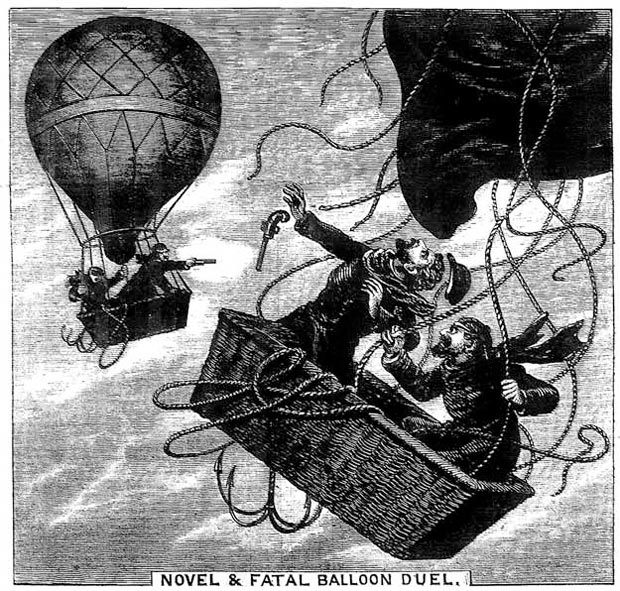 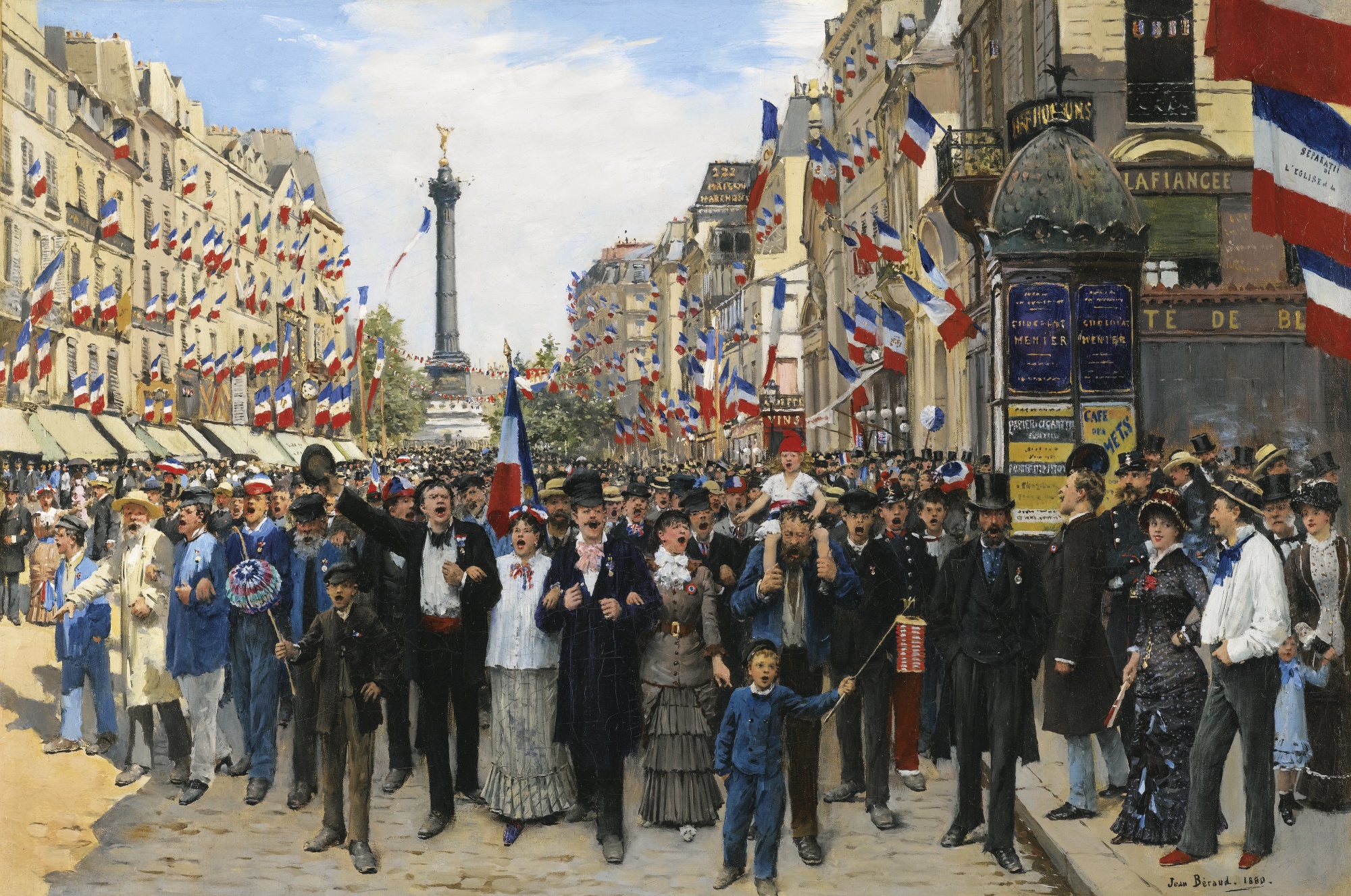 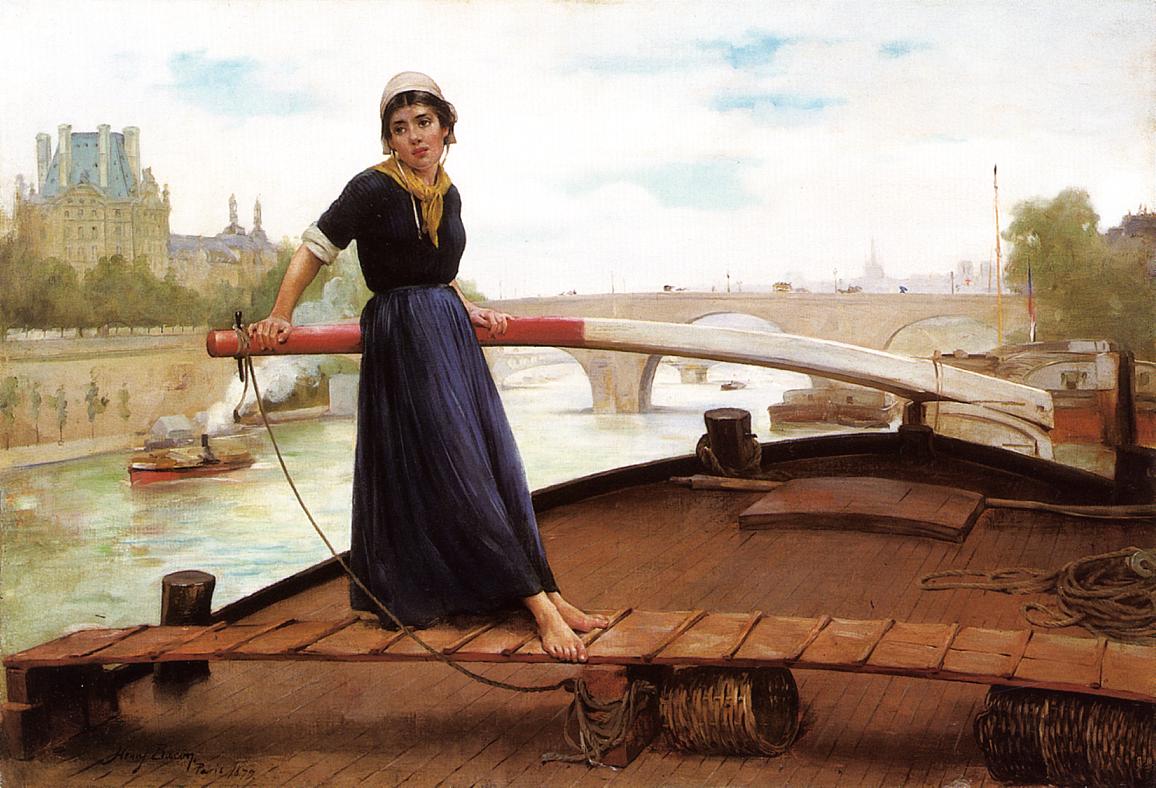 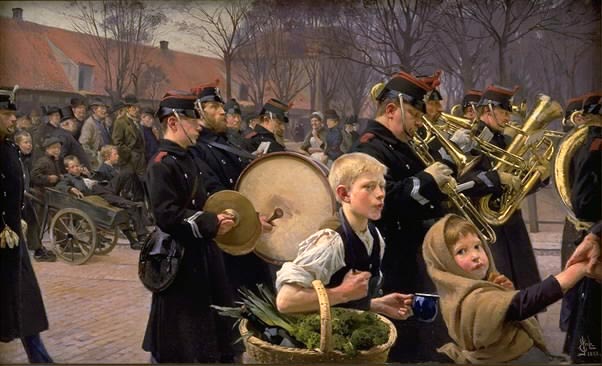 Like the Hudson river school, the German Dusseldorf school also inspired the Austrian born painter Eugene Guerard. Starting as a golddigger in the Victorian goldfields, he became one of the greatest landscape painters of Australia.

Austria had some great orientalist painters. Besides Leopold Carl Muller who was nicknamed by his students “Muller the Egyptian”, two other artists specialised in the exotic world of the orient :  Ludwig Deutsch and Rudolf Ernst. These two friends settled in Paris close to their hero : Jean Leon Gerome with his photorealistic technique. Amazing colourful and full of detail they both produced masterpieces like the palace guard.

Like the French Jehan Georges Vibert,  Georges Croegaert also specialized in anticlerical art. Petrus van Schendel chose another genre : candle-lit night scenes. More about him in the light and dark tour. A less known Belgian painter is Antoine Wiertz. He won the prestigious prix de Rome and left us a collection of sometimes macaber art, check the guided horror tour. Finally, the colonial relationship with Congo resulted in paintings of dark Africa among which Madeleine Lefevbre must be named.

The great realist painter of Brazil is Jose Ferraz de Almeida junior. He studied in Paris as one of the students of Cabanel. He was stabbed to death by his cousin because of a love-affair.

Jakub Schikaneder is a painter who loved nocturnal scenes with a sentimental mood. One of his more known works is murder in the house. His dark fascination also resulted in death scenes like necropolis or drowned.

The father of the Danish golden age is Christoffer Wilhelm Eckersberg. He studied under Jacques Louis David. On his turn, Eckersberg trained many young Danish painters among which Christen Kobke. The second half of the 19th century was dominated by Carl Bloch. He was asked to decorate the chapel of the Frederiksborg castle with scenes of the life of Christ in which he succeeded masterly. Finally Peder Mork Monsted must be named. He made fantastic landscape paintings.

The great Finnish painter Albert Edelfelt created many impressive canvases. Among his masterpieces are funeral of a child and his portrait of professor Runeberg.

Greece was an emergent state in the19th century. After their war of independance, the German prince Otto became their first king. The newly trained Greek painters studied at the German academy of Munich.  Nikolaos Gyzis made great portraits and genre paintings like capuchin monk and the barber. Konstantinos Volanakis was the great seascape painter of Greece.

Francesco Brunery studied with Jean Leon Gerome and specialised in paintings of cavaliers and cardinals. He shared his choice for anticlerical art with Andrea Landini. Another Italian realist painter is Telemaco Signorini. His later paintings are more associated with impressionism.

The academic painter Jan Willem Pieneman did a lot of history painting among which his masterpiece the battle of Waterloo. One of his students was Jozef Israels, a Jewish painter who was inspired by the French Realist and Barbizon movement and was the founding father of the Hague school. His social realism reflected in paintings of poor fisherman and farmer families and was an inspiration for Vincent van Gogh. An academic portrait painter who must be mentioned is Hubert Vos, see the guided tour of traveller-artists to discover more of him. Finally some great romantic painters deserve mention among which Barend Cornelis Koekkoek and Wijnand Nuijen.

Johan Cristian Dahl and Hans Gude are Norway’s most famous romantic landscape painters. Although both painters made study trips through Europe, they had a strong preference for their home country with its fjords, mountains and seacoasts. A painter of the second half of the 19th century is Erik Werenskiold. His photorealistic technique is stunning and resulted in masterpieces like the funeral.

Two Philippine painters entered the Spanish National Competition of Fine Art in 1884 and both were awarded prices. Juan Luna won the first gold medal with his massive canvas “Spoliarium” about the roman gladiators and Felix Resurreccion Hidalgo won the ninth silver medal also with a painting about the romans mocking christian women. The fact that Phillipine painters, being colonized by Spain, surpassed Spanish painters, was felt as a triumph.

Henryk Siemiradzki was a true academic painter with a subject choice of the Greek-Roman world and the life of the early christians. Jozef Brandt was the founding father of the Munich School of Polish painters and excelled in war paintings and depictions of horses. He specialised in 17th century warfare in which the battle of Vienna against the Ottoman empire took place. This resulted in orientalistic  scenery. His fellow Munich School painter Alfred Wierusz-Kowalski became renowned for his winter landscapes with wolves and horse led carriages. Finally Adam Styka must be mentioned. This 20th century painter was nicknamed the master of sunlight and has a rich oriental portfolio full of colour and joy. Afterwards his attention shifted to the American Wild West.

The great romantic painter Francisco Goya is famous for his depiction of the Peninsular Napoleonic war and its mutual atrocities. His third of May 1808 illustrates the revenge of the French troops because of the Madrid revolt of the second of May 1808. Enrique Simonet was a more academic painter. He made an impressive painting about a dead woman being dissected in a  morgue. Another academic painter who died early, was Eduardo Zamacois Zabala. Trained in Paris and a friend of Jehan Georges Vibert, he also painted anti-clerical art. The brothers Jose Jimenez and Luis Jimenez Aranda made some great genre paintings. The catalan Maria Fortuny had an international reputation and some orientalistic themes like his arabic chief.  Joaquin Sorolla y Bastida started his career with a social-realistic style but transformed later in a more impressionistic style. His themes are often associated with the sea.

Carl Gustaf Hellqvist was an important history painter. He won a gold medal with his masterpiece Valdemar Atterdag holding Visby to ransom, 1361. To prevent the burning of their city, the citizens of Visby had to fill three barrels with gold and jewelry. Another famous Swedish painter is the late 19th century Anders Zorn. He was asked to make royal portraits and did a lot of female nudes.

Trained in the Dusseldorf academy, Arnold Bocklin did not become a traditional landscape painter but chose a more symbolic style, thereby creating his own universum. He influenced many artists among which Salvador Dali and Rachmaninoff. His most famous painting is the isle of dead.

The ottoman Osman Hamdi Bey studied under Jean Leon Gerome in Paris. Besides painting he also did a lot of archeological research. A famous painting of him is the tortoise trainer.