To complete the tour of travelller-artists I will finish with the Russian Vasily Vereschagin (also spelled Vereshchagin). His ouevre is so immense that we will need another chapter, just for this painter. He was educated as a marine cadet in St Petersburg where he learned to speak english, french and german. Although he excelled in his school and was admitted to the naval academy, he chose to explore his painting capabilities. But as an artist, he stayed true to his military origins. He painted many war scenes and also engaged in battles on occasion.

Vereschagin loved his own country and chose to depict rural scenes and poor people living their lives, whether in the wooden churches of the northern regions or in more urban areas 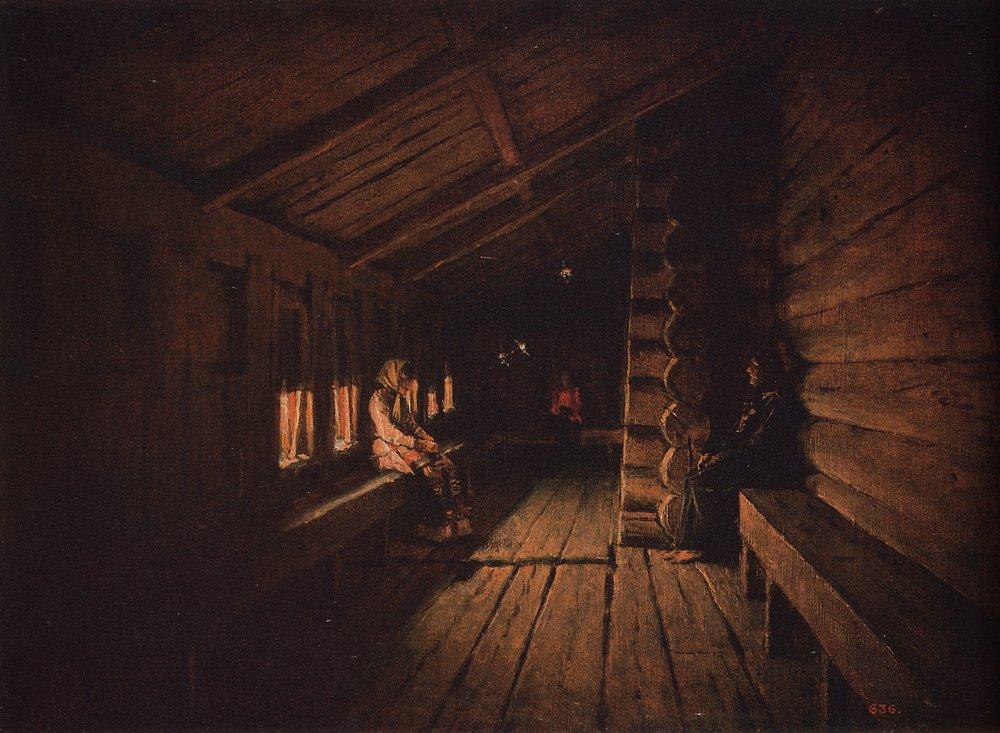 Vasily Vereschagin, before the confession at the entrance to a village church,1888 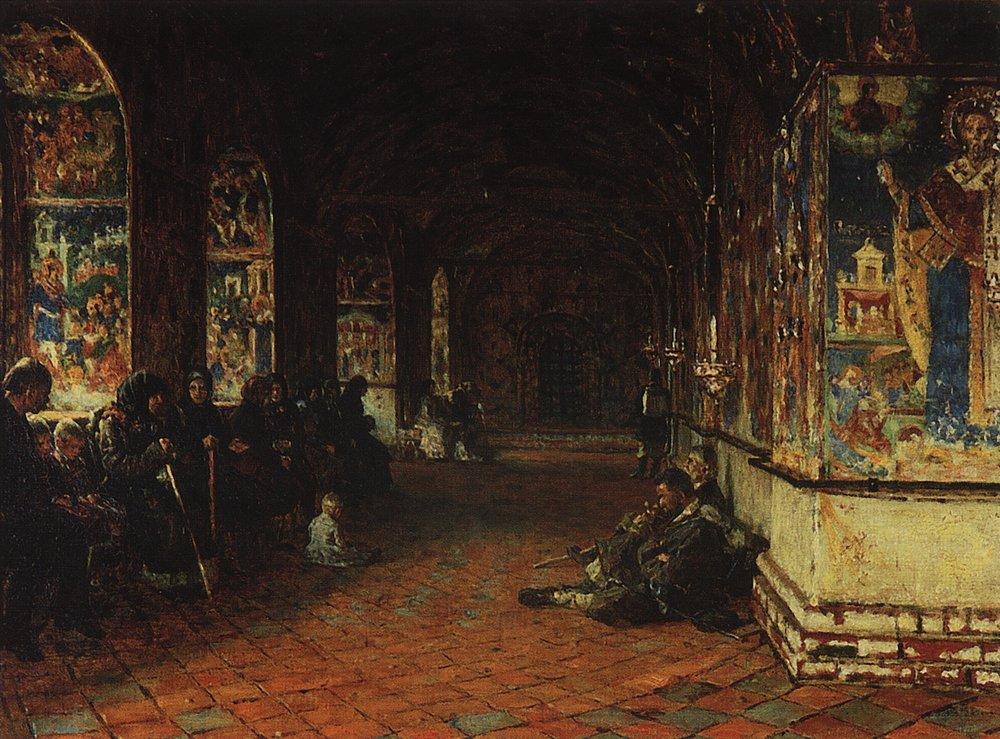 Vasily Vereschagin, the porch of the church of john the baptist in tolchkovo yaroslavl,1888

One of his first official duties as a battle painter, was to travel with the Russian troops in Turkestan. The borders of the Russian empire further stretched out to the south. But it was not just painting sketches, Vereschagin actually joined the troops to fight the enemy if the situation got tense. A small russian legion stayed in Samarkand when they were confronted with a massive enemy assault. This scene was depicted in the following painting were the russian defenders prepare for the invasion. Vereschagin got an official medal (order of St Georges) for his part in the battle of Samarkand. 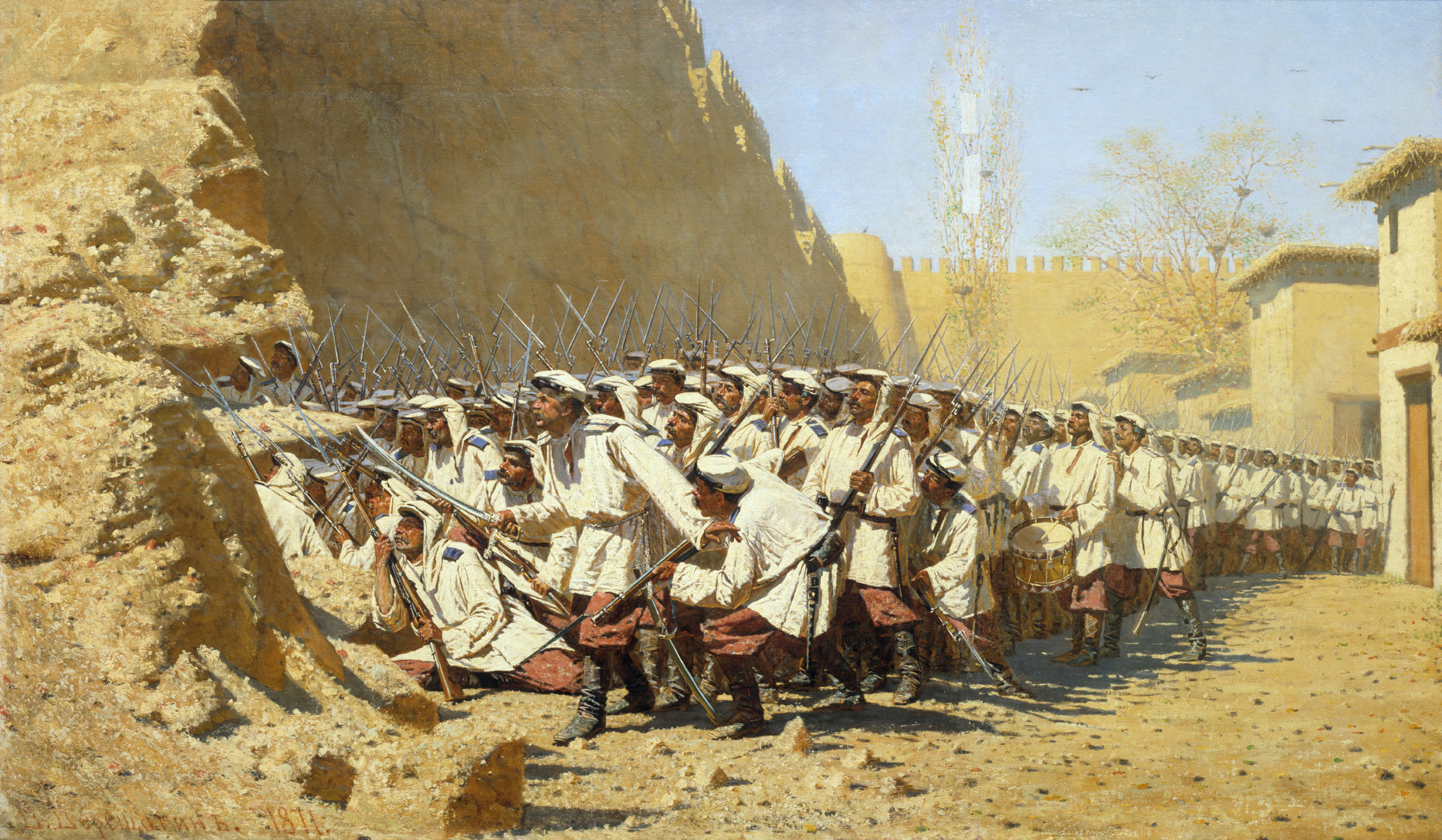 Vasily Vereschagin, at the fortress walls let them enter,1871

Vereschagin was a real realist painter however. Instead of gloryfing the battle and maklng heroic canvases, his paintings showed the naked truth. 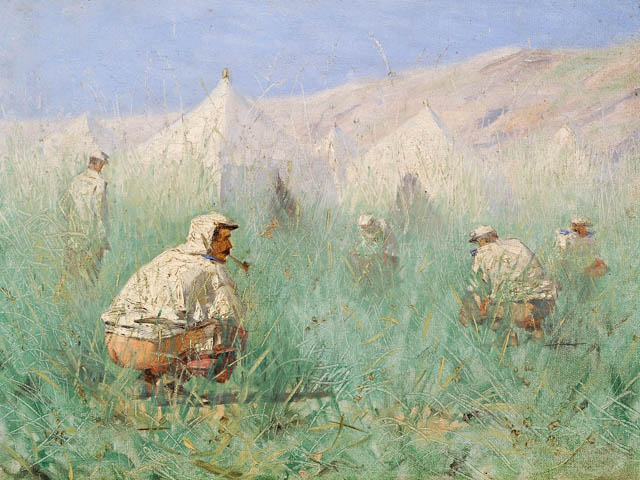 Vereschagin realised that war was in itself insane and showed the other side of the battle. That the enemy was reduced to evil and dehumanized. 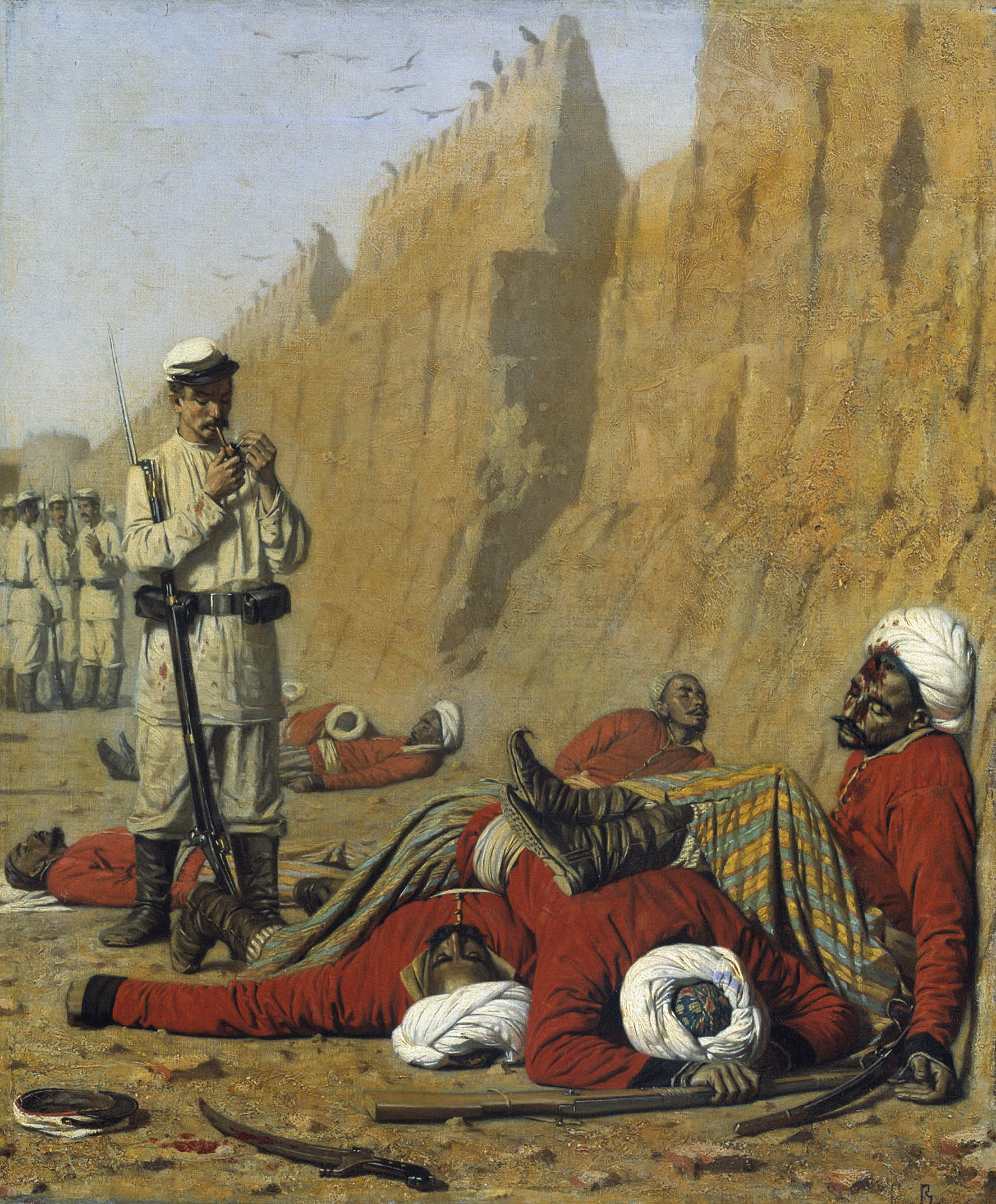 Other examples of his depiction of the atrocities of was is the painting of the battle of Shipka. Instead of the cheering troops Vereschagin places the dead soldiers in front of the painting and the general on the background. 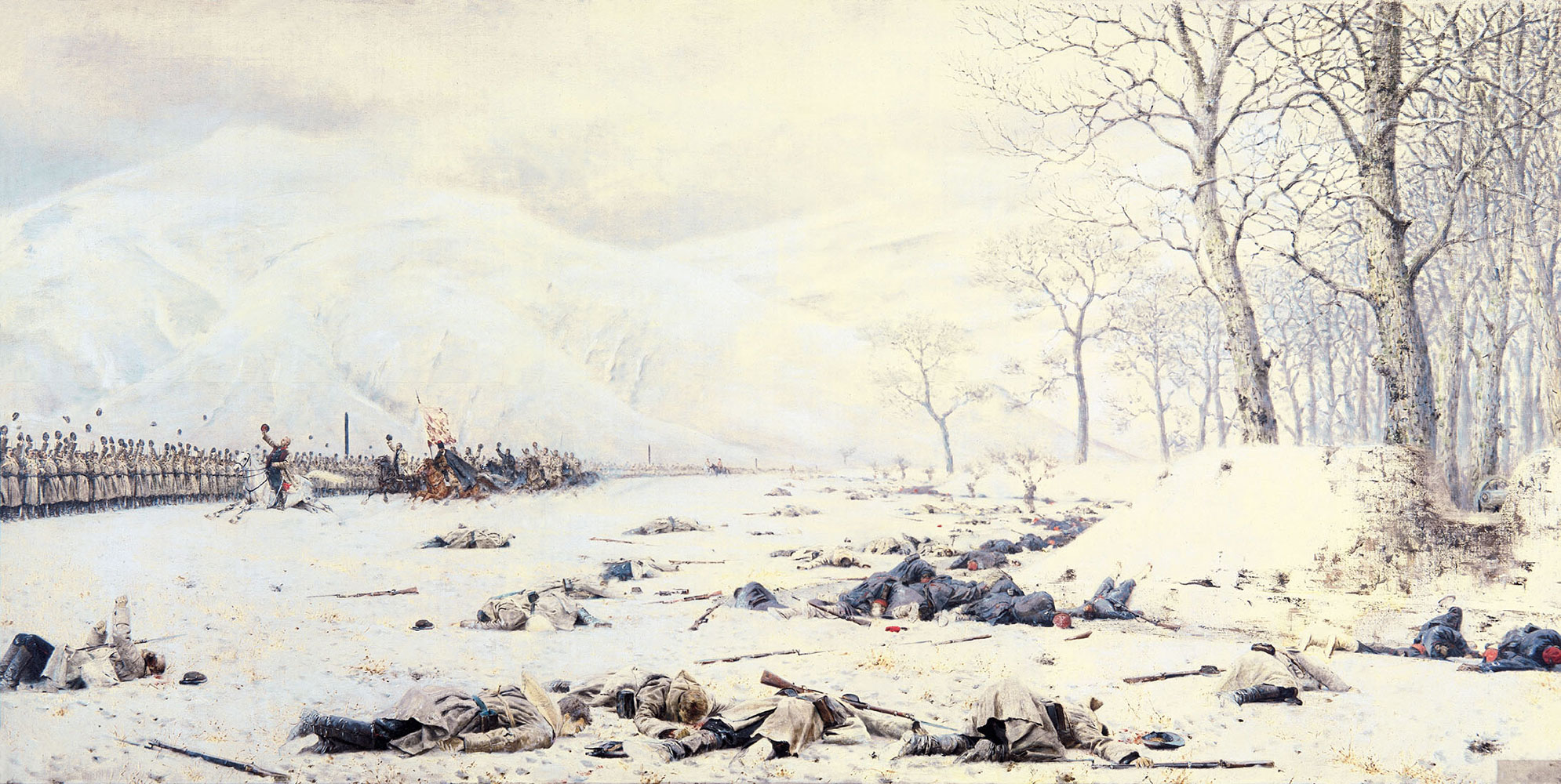 Vasily Vereschagin, Skobelev in the battle of Shipka, 1883

But Vereschagin was not done with just travelling through central Asia. He wanted to escape the steppes and deserts and to visit India with its bright colours and splendid architecture. 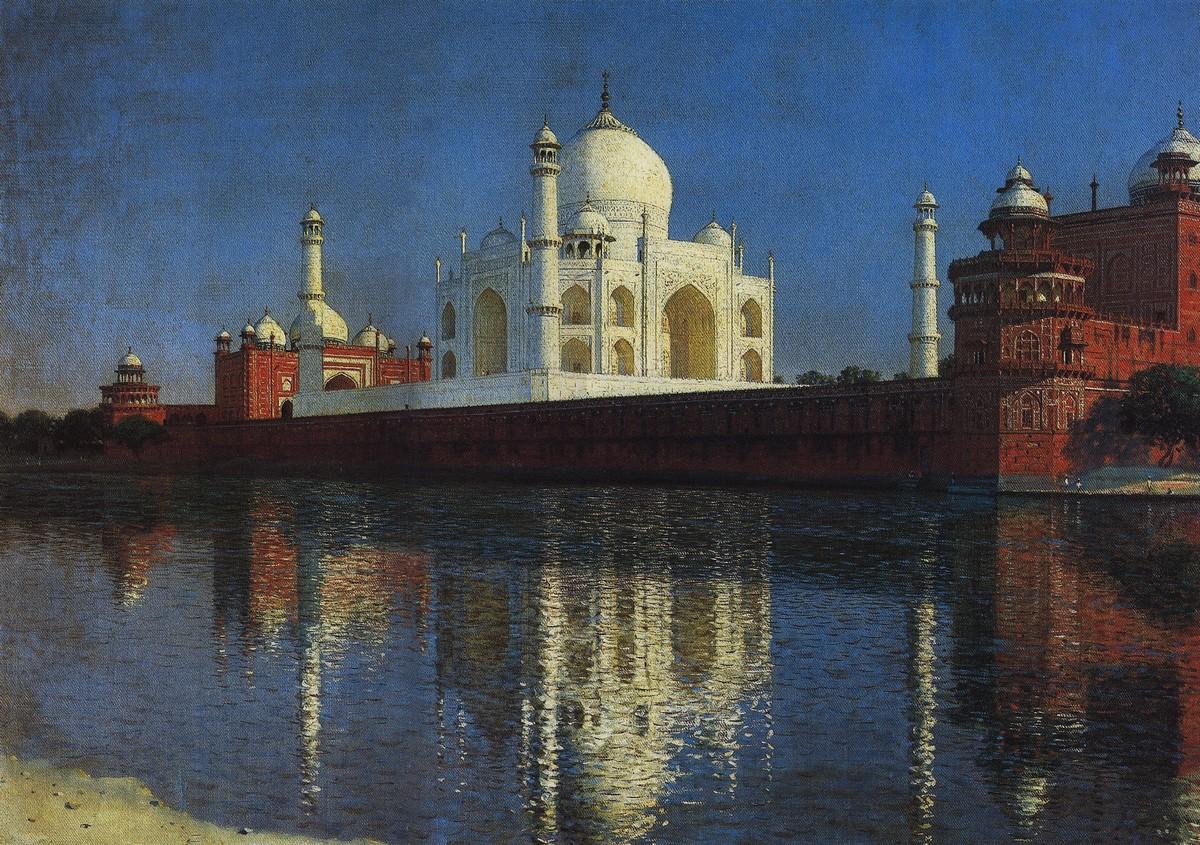 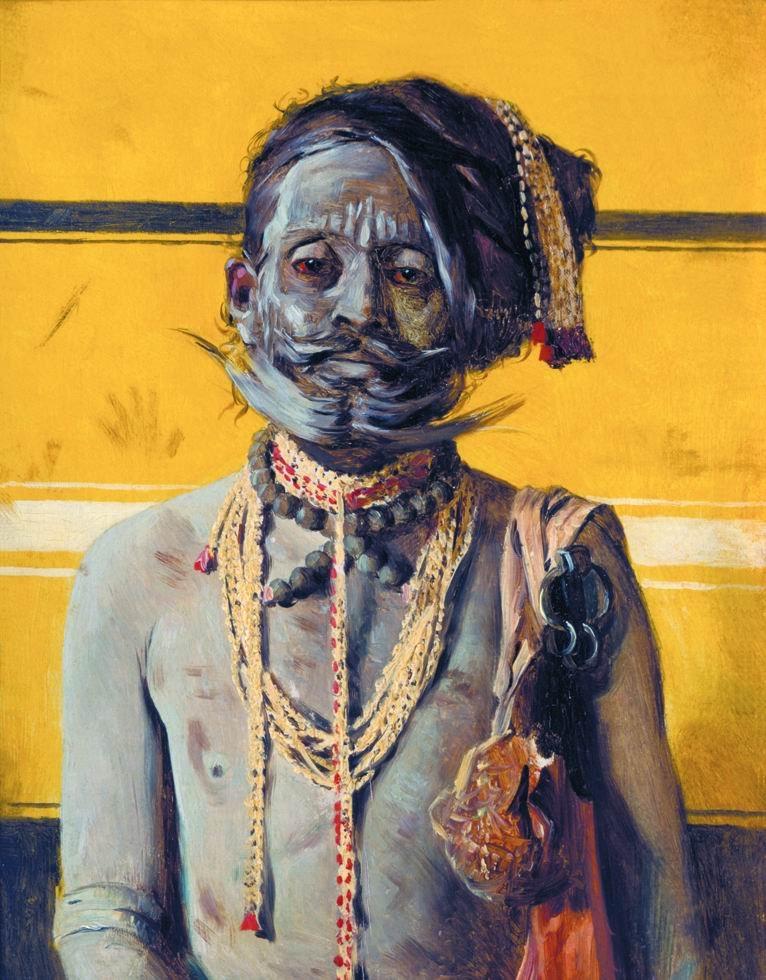 During his two trips to India, Vereschagin visited the Himalaya mountain range. He was a plein air painter par excellence and took his easel to great heights. He started from the base station in Darjeeling in january which is in the middle of the winterseason with high avalanche risk and heavy snowfall. He wanted to approach the Kangchenjunga mountain massif which was regarded the highest mountain in the world till 1851. For that he aimed to climb the Dzongri peak (almost 14000 feet). It almost killed him and his wife. At the end the managed to arrive at a shepherds hut and had to be supported by two coolies to make sketches. His wife describes : “His face is so frightfully swollen,” she tells us, “that his eyes look merely like two wrinkles, the sun scorches his head, his hand can scarcely hold the palette, and yet he insists on finishing his sketches”. The following two paintings are from that breathtaking experience. 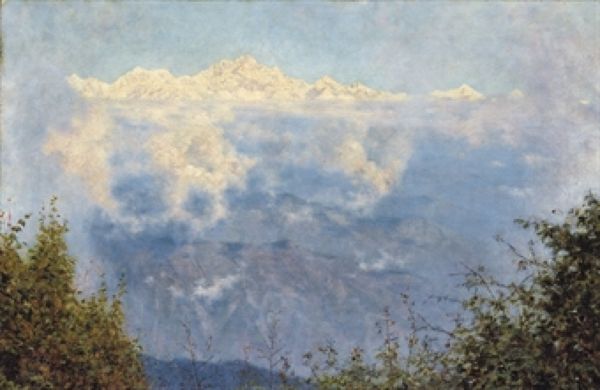 Vasily Vereschagin, Kangchenjunga, Pandit and other mountains in the clouds. Circa 1875. 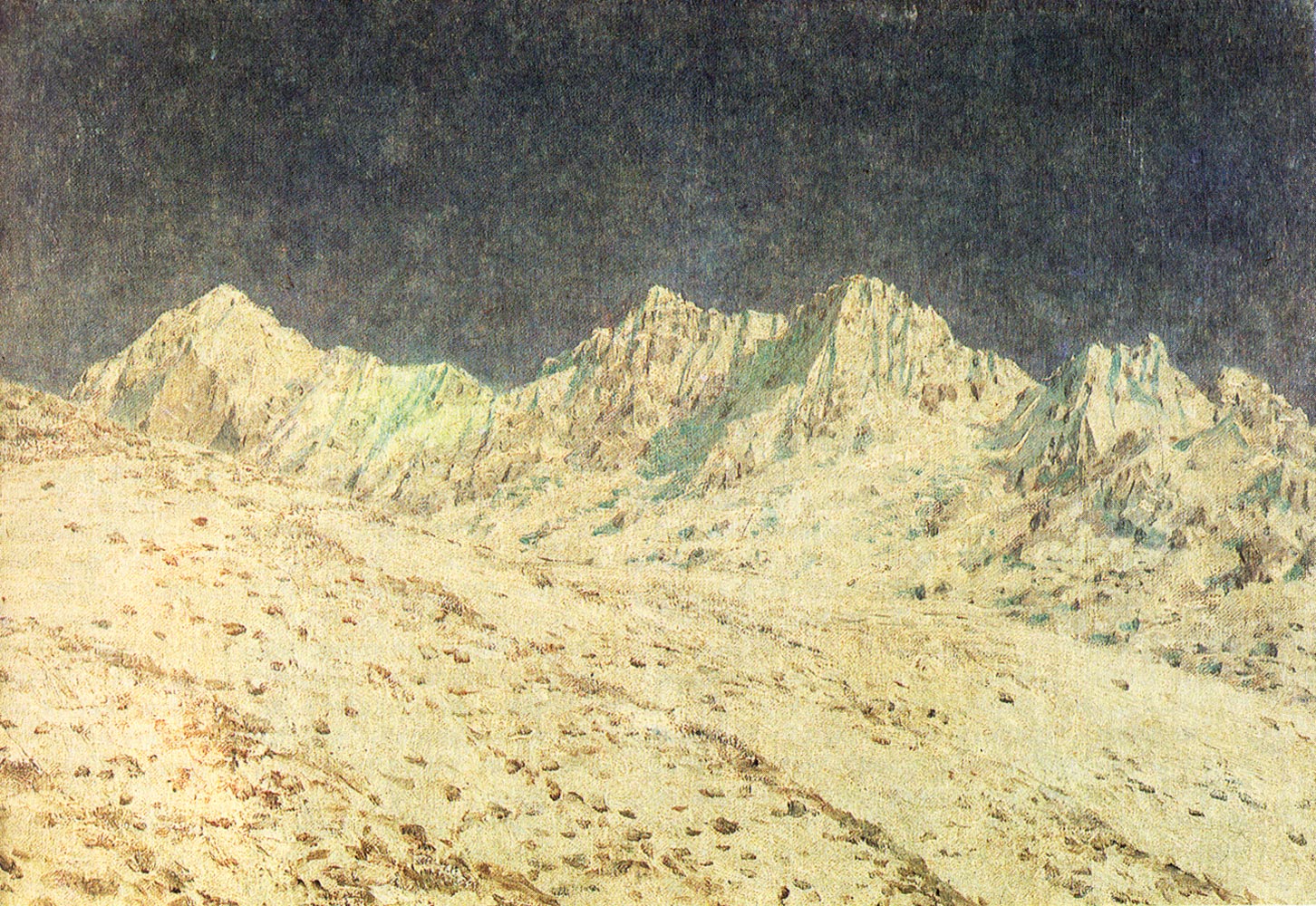 Vereschagin continued his journey by visiting the magical kingdom of Sikkim. The white snowy mountains were regarded as holy mountains by the buddhist religion. He managed to witness religious ceremonies which were hidden from european eyes for centuries in which the lama was wearing colored robes and a mask. 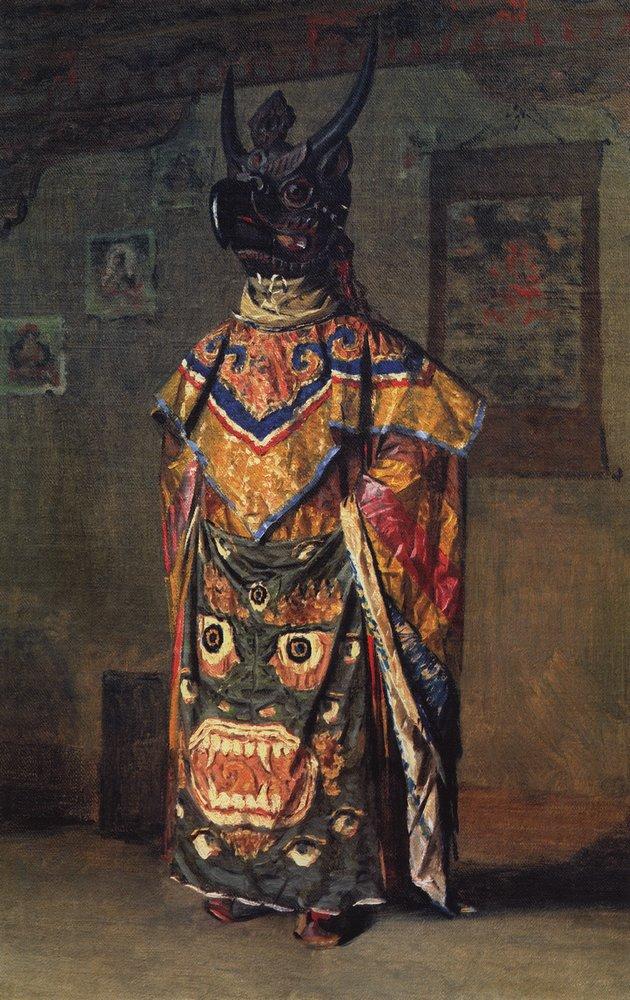 Vasily Vereschagin, buddhist lama in a monastery on a holida pemionchi sikkim,1875 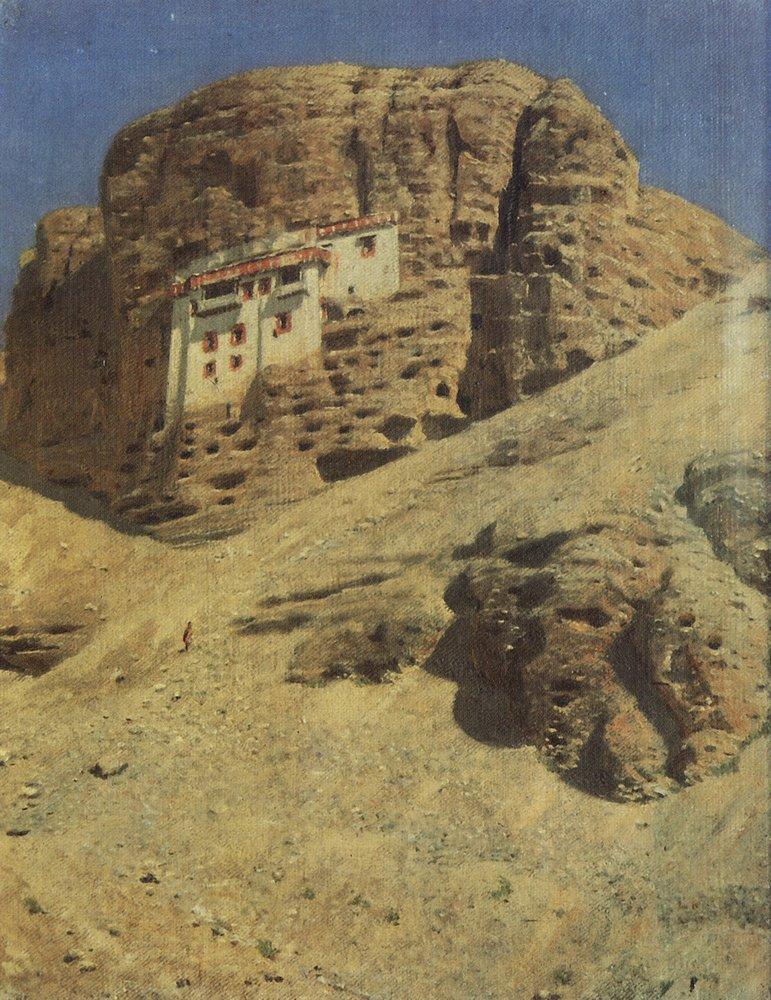 Another fascination of Vereschagin was the holy land. But his approach was again different than many others. He carefully studied the people and the surroundings and tried to reconstruct plausible biblical subjects. Some of this paintings were much criticised and two were even destroyed by fanatics so that we only have black and white reproductions of the originals. The following painting is one of the destroyed paintings called “Resurrection” and is depicting the moment that Jezus exited his grave. Vereschagin observed that all the graves were narrow, horizontal crypts and hence he painted a crawling Jezus instead of a glorious hero who is firmly standing on both feet. 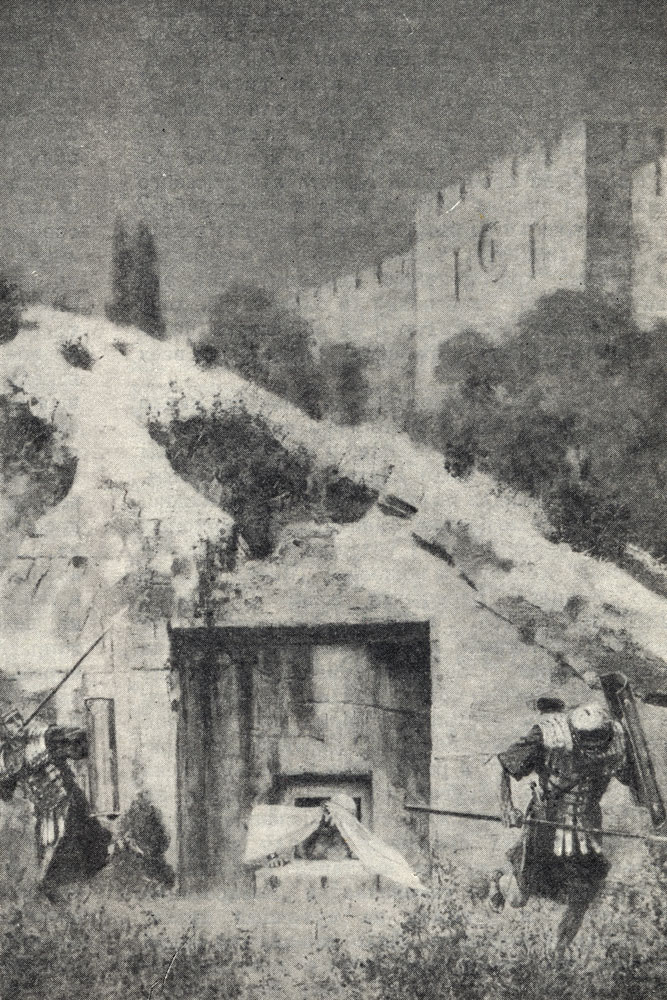 Later on Vereschagin stayed a while in his own country Russia to make a series of Napoleons campaign in Russia. But his restlessness was stronger than the comfort of his home. He made a tour to the Philippines and also visited Cuba to study the hills were the current president of the USA Theodore Roosevelt had commanded his rough riders to victory. 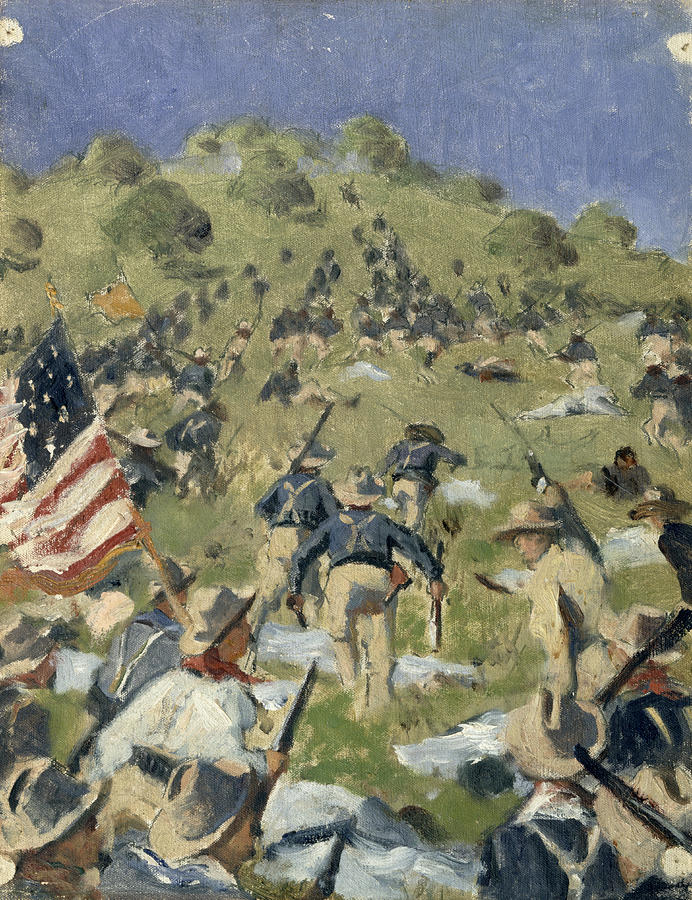 His last years he spended in Japan, another fascinating world. He made a few great portraits and visited temples and shrines. 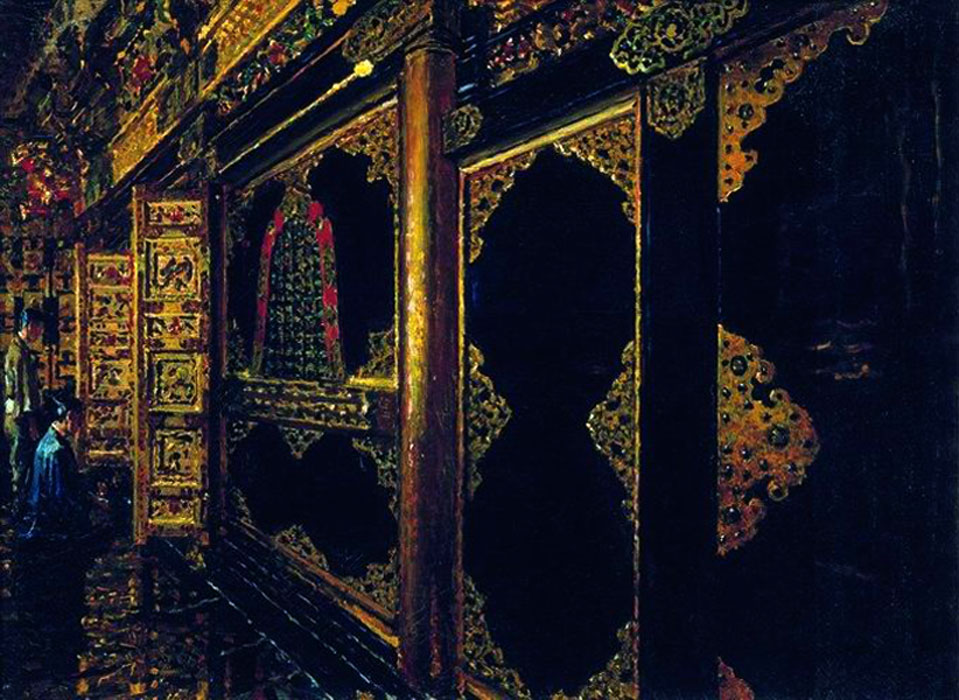 But duty called again as the first Russo-Japanese started. The empires of Russia and Japan collided and a naval battle was fought at Port Arthur in Manchuria (present China). Vereschagin was welcomed on board of the naval flagship “Petropavlovsk”. The ship struck two Japanese mines and sunk fast. Vereschagin continued painting the sea battle while the ship sunk and drowned with the majority of the crew.