In the Middle Ages a bestiarium was a popular book. Originating from old Egypt, Hebrew and Indian stories, various animals and other creatures were introduced and described with moral lessons which already started in the first centuries AD. In this guided tour, we will meet some of this creatures which are wonderful to imagine and to depict.

We will start with the mythological unicorn.

The unicorn was a fierce creature and hard to capture for hunters. Leonardo da Vinci described the classical hunting method : “The unicorn, through its intemperance and not knowing how to control itself, for the love it bears to fair maidens forgets its ferocity and wildness; and laying aside all fear it will go up to a seated damsel and go to sleep in her lap, and thus the hunters take it”.

In the Middle Ages the horns of a unicorn were very precious. Often the spiral tusk of an arctic whale (narwhal) was selled by northern traders to wealthy persons including Queen Elisabeth of England. 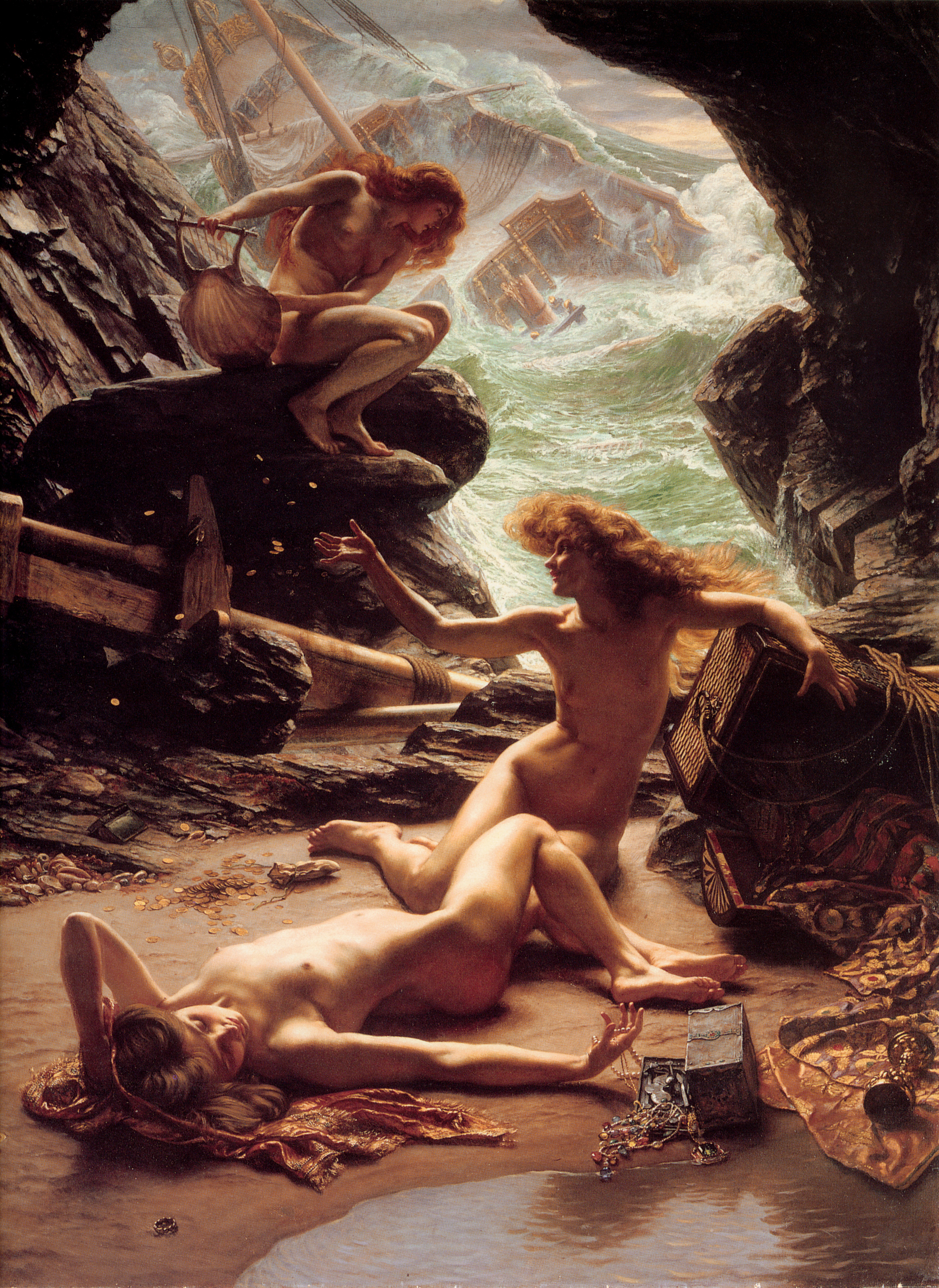 We switch to sirens, water creatures that were daughters of the watermonster Ceto and hence also were dangerous creatures. They played on their instruments to lure innocent sailors to shipwreck them. In the classical story of Odysseus, he was warned for the sirens and curious to their songs, he let himself be tied to the mast of his boat and let his sailors put beewax in their ears. Not all woman swimming in the sea were bad although, the Nereids were helpful seanymphs and were depicted in the following painting of Sorolla. 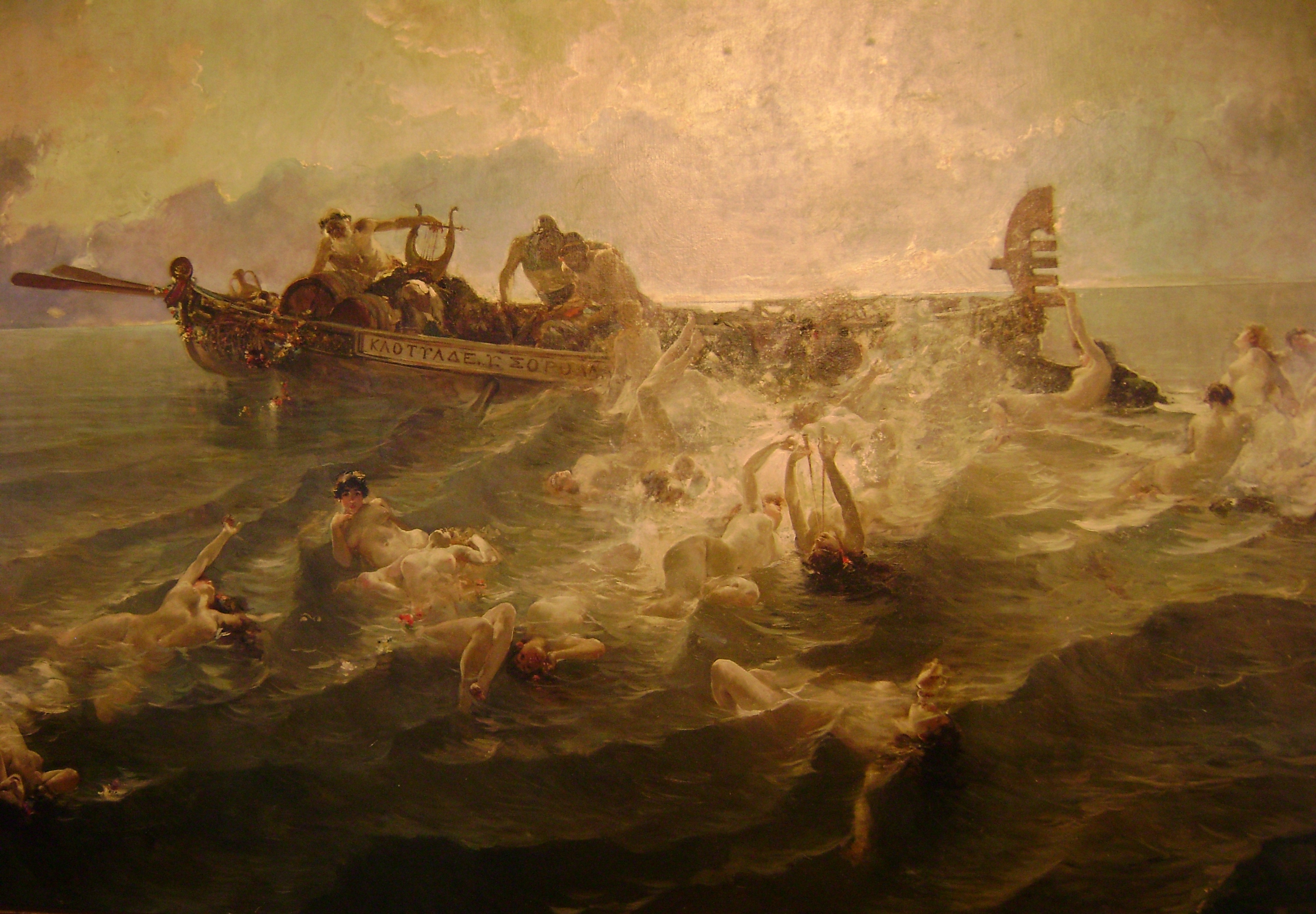 From sea creatures back to land, there are a couple of interesting creatures who are partial human and partial animal. One of the most famous is the centaur : half human and halve horse. A beautiful example of a centaur statue can be found in Florence at the famous Loggia, one painter who depicted a centaur was Bocklin. 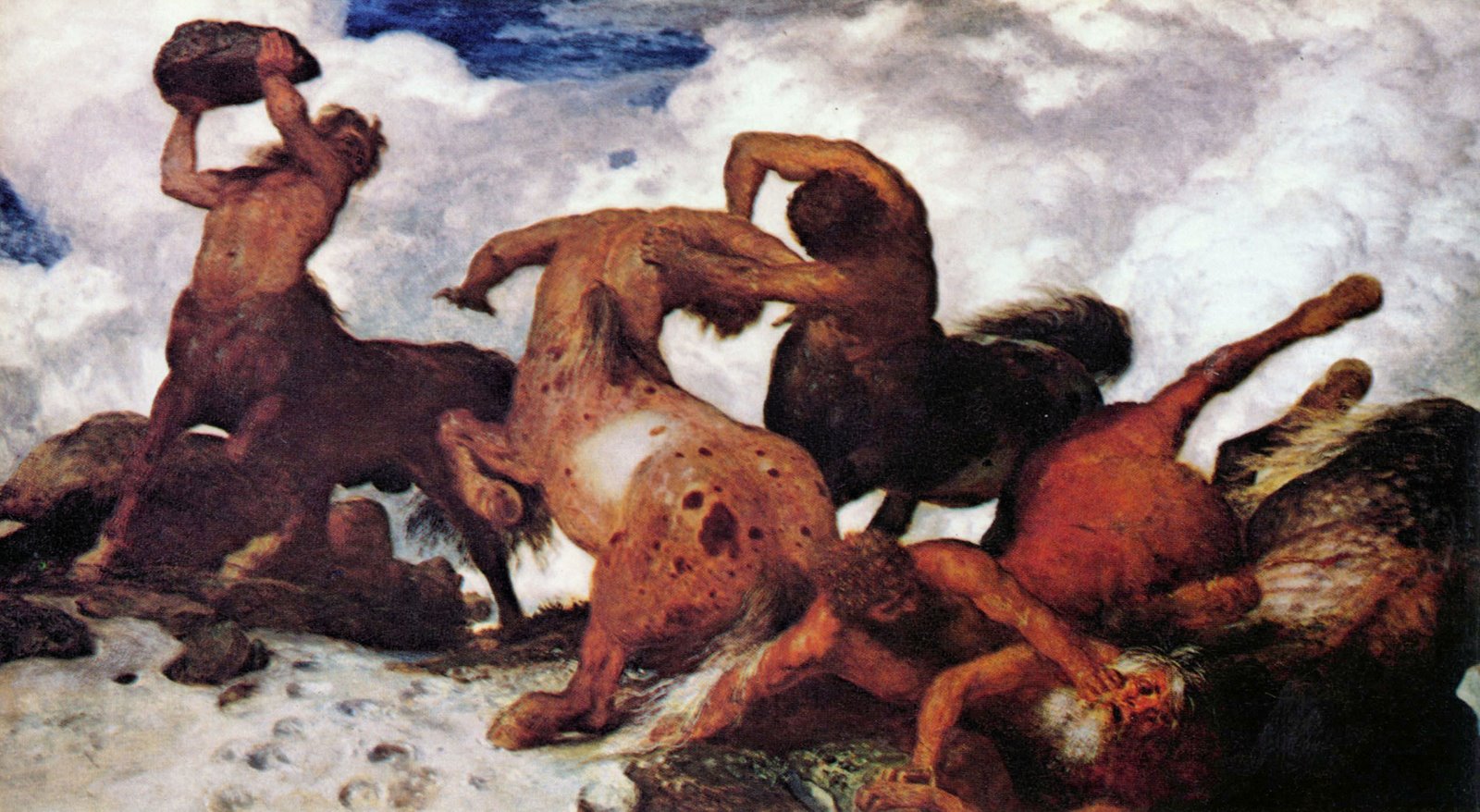 Another example from Moreau is a flying centaur, a chimerae. 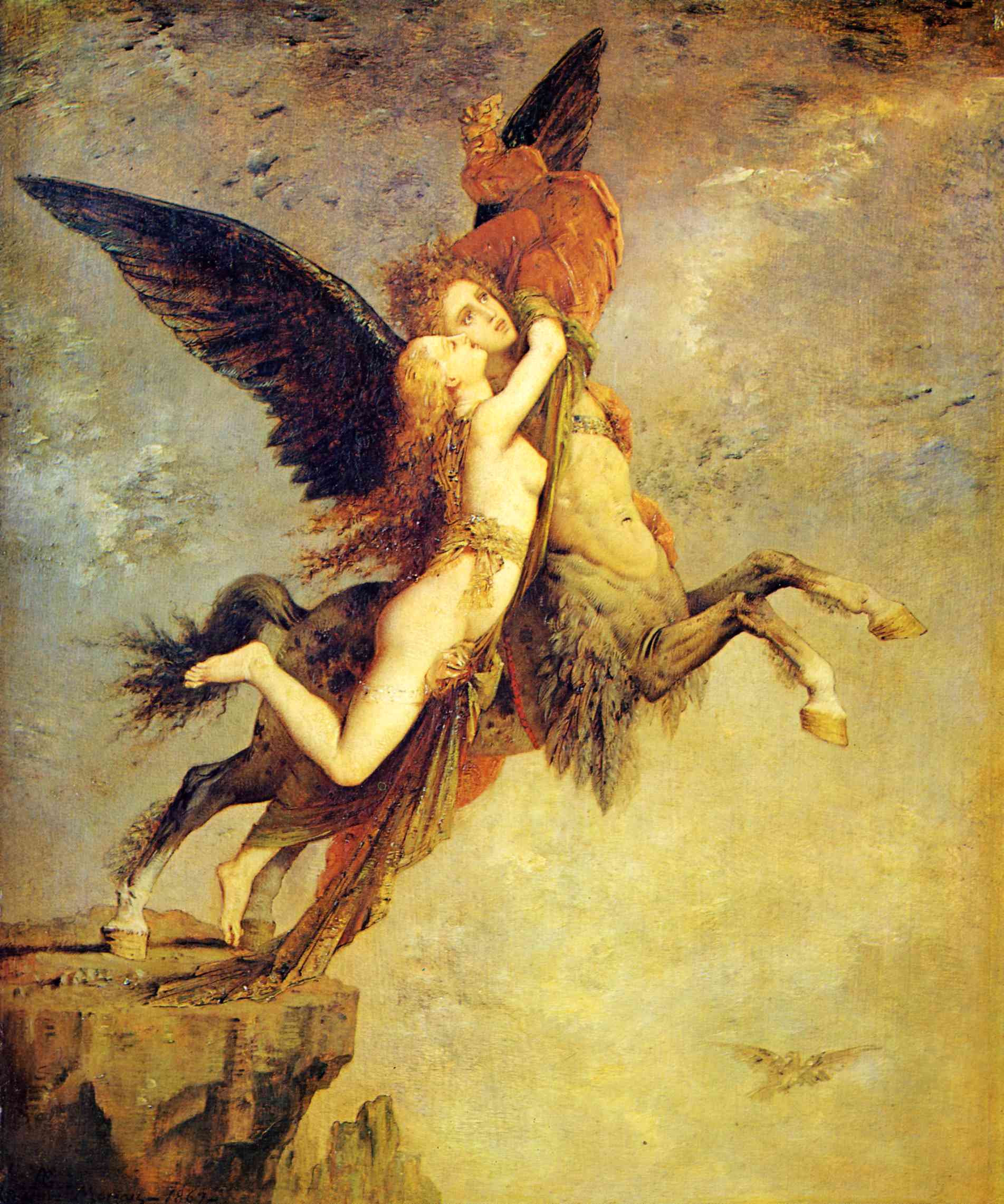 But one of the most inspiring landcreatures is the dragon. The dragon is an universal monster who is is found in literature and visual arts ranging from Europe to China. A famous story is the one of Saint George, the dragon slayer. In the oldest version, Saint George by accident, stumbles upon a princess who is to be fed to a local dragon somewhere in present day Libya. The evil dragon threatened the local people that he wanted two daily sheeps and if they could not deliver he had to eat a human being, chosen by lottery. Saint George captures the dragon and saves the princess and in return for a mass baptism of the people, he slaughters the dragon in the end. 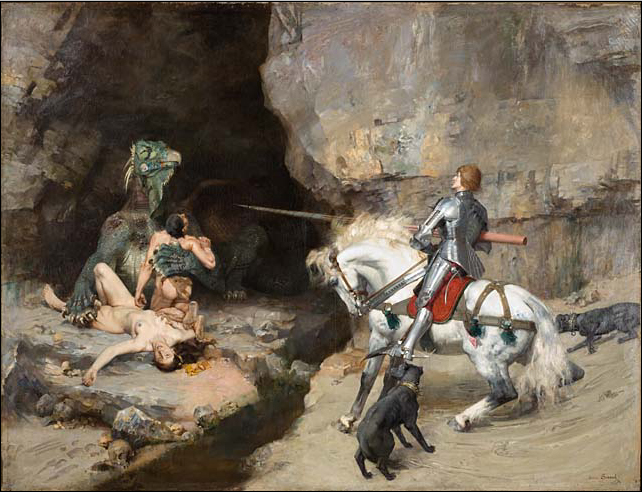 This heroic fight has also been depicted by Briton Riviere from another perspective. The dragon is already slain, but our hero and his horse are so tired of the fight that they cannot stand on their feet, and rest next to the dead body of the dragon. 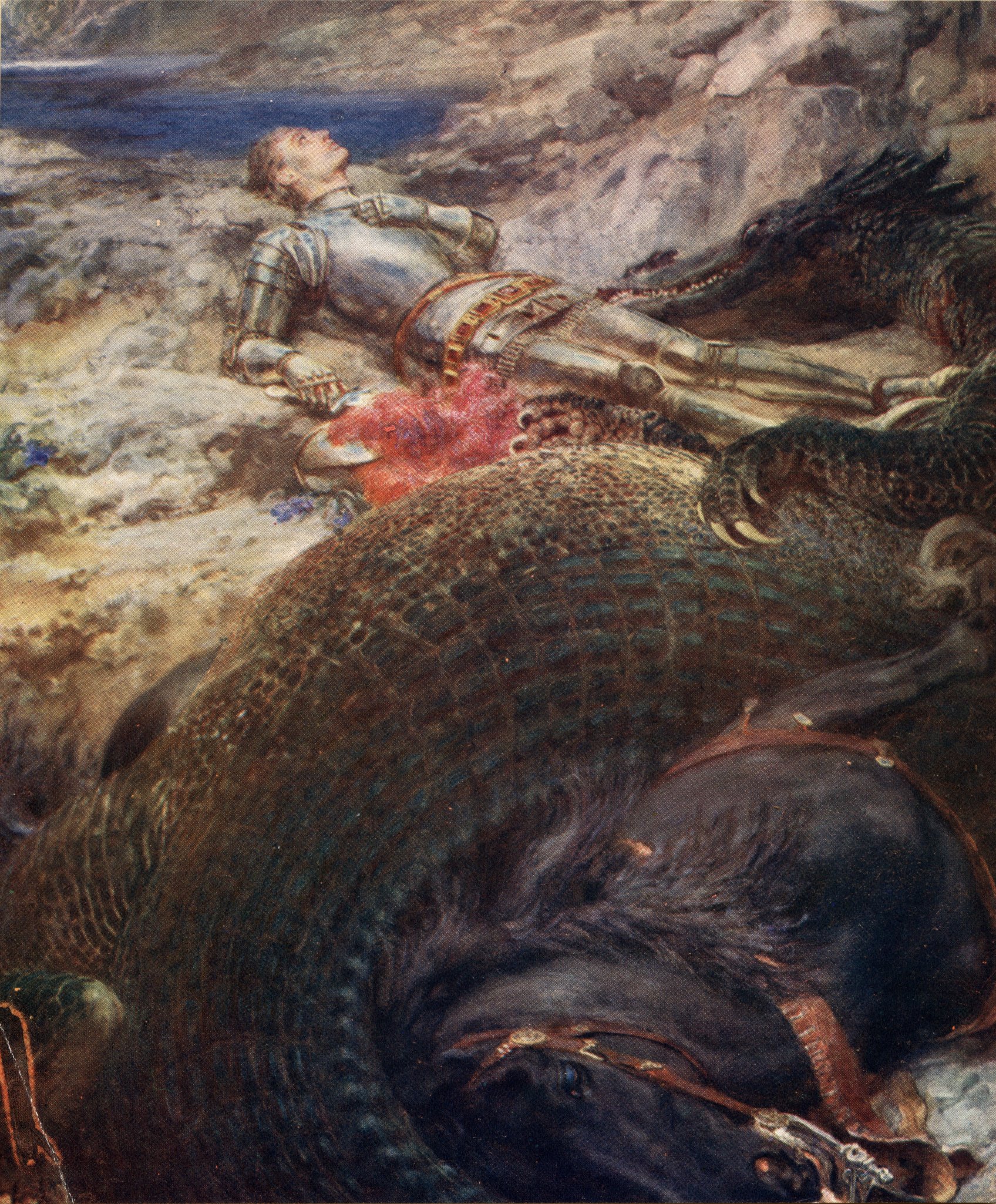 The 19th century was also the time that big lizard like bone remains were found who were named megalosaurus (big lizard) and  after the discovery of other types (ie iguanodon) the family name of dinosaur (fearful lizard) was coined in 1842. John Martin was one of the few who actually painted his imagination of living dinosaurs. 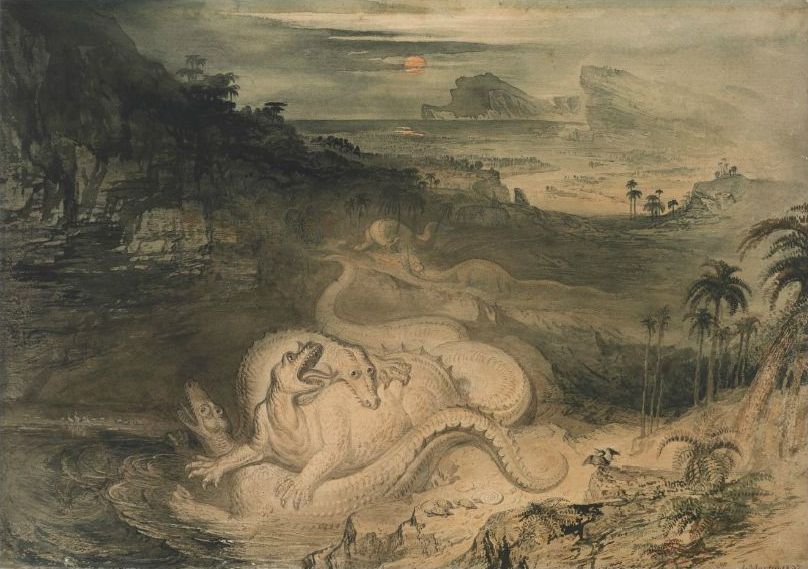 John Martin, Country of the Iguanodon, 1837

We will end this guided tour by somewhat more friendly creatures than dragons and dinosaurs : lovely innocent fairies. 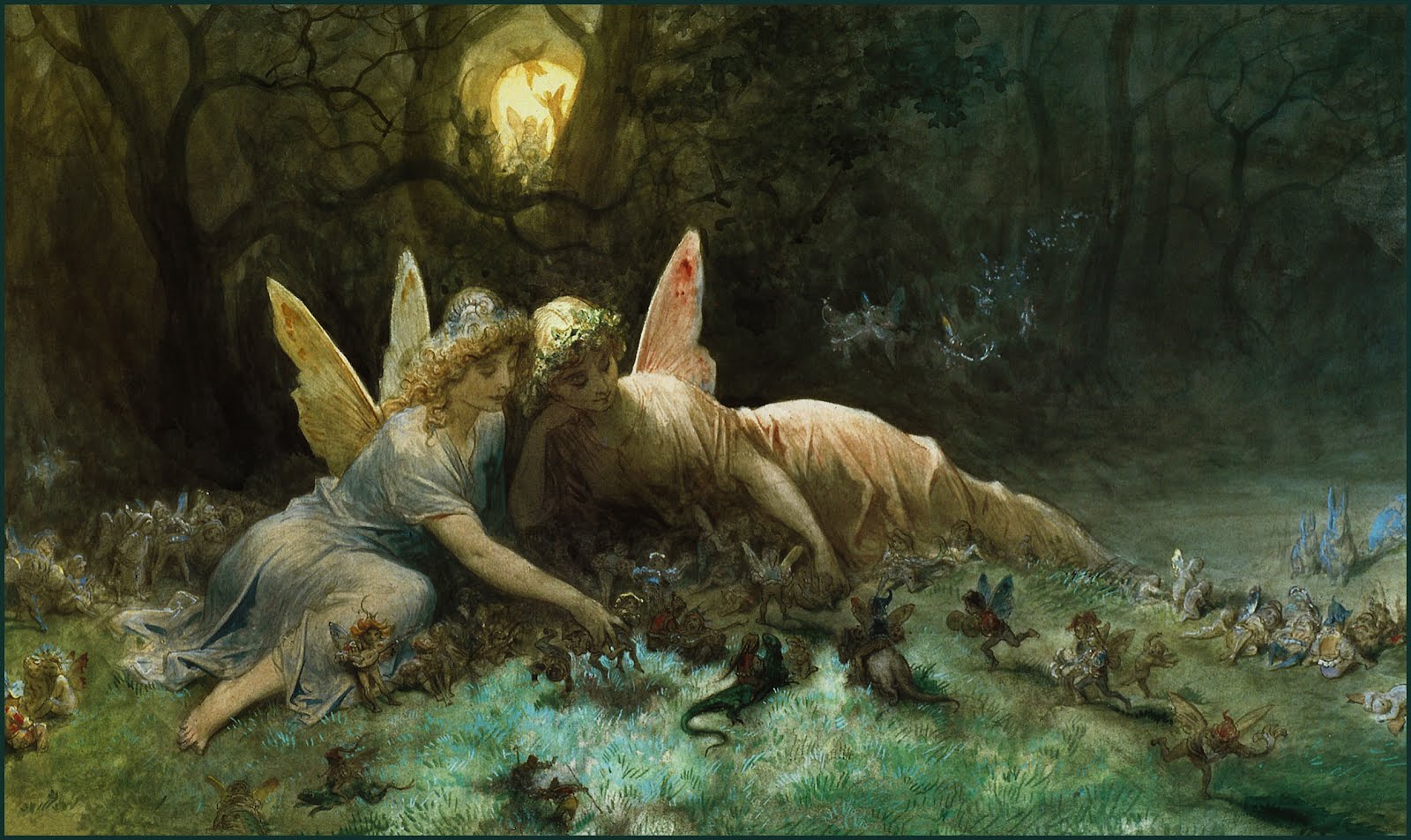