Not only did artists paint war, they also participated as soldiers. In this post I will focus on French artists during the siege of Paris in the Franco-German war of 1870/1871. This war became a turning point in 19th century european history with the end of the Napoleonic era and French supremacy and the start of the German empire.

In the beginning of the war, there were quite a lot of artists who decided to fled the city or even the country. Lawrence Alma-Tadema, who was staying in Paris at that time, took the boat to London. He was followed by Claude Monet and Camille Pissarro. Paul Cezanne went to the far south of France,

When most of the French army was defeated and Napoleon III captured in the battle of Sedan on 2 september 1870, the German army could quickly advance to Paris were the city was surrounded on 19 september. The following 4 months were characterized by strong resistance and determination of the Paris defence forces and the citizens of Paris. The dividing line between soldier and citizen however was fluid : a lot of volunteer brigades were formed. 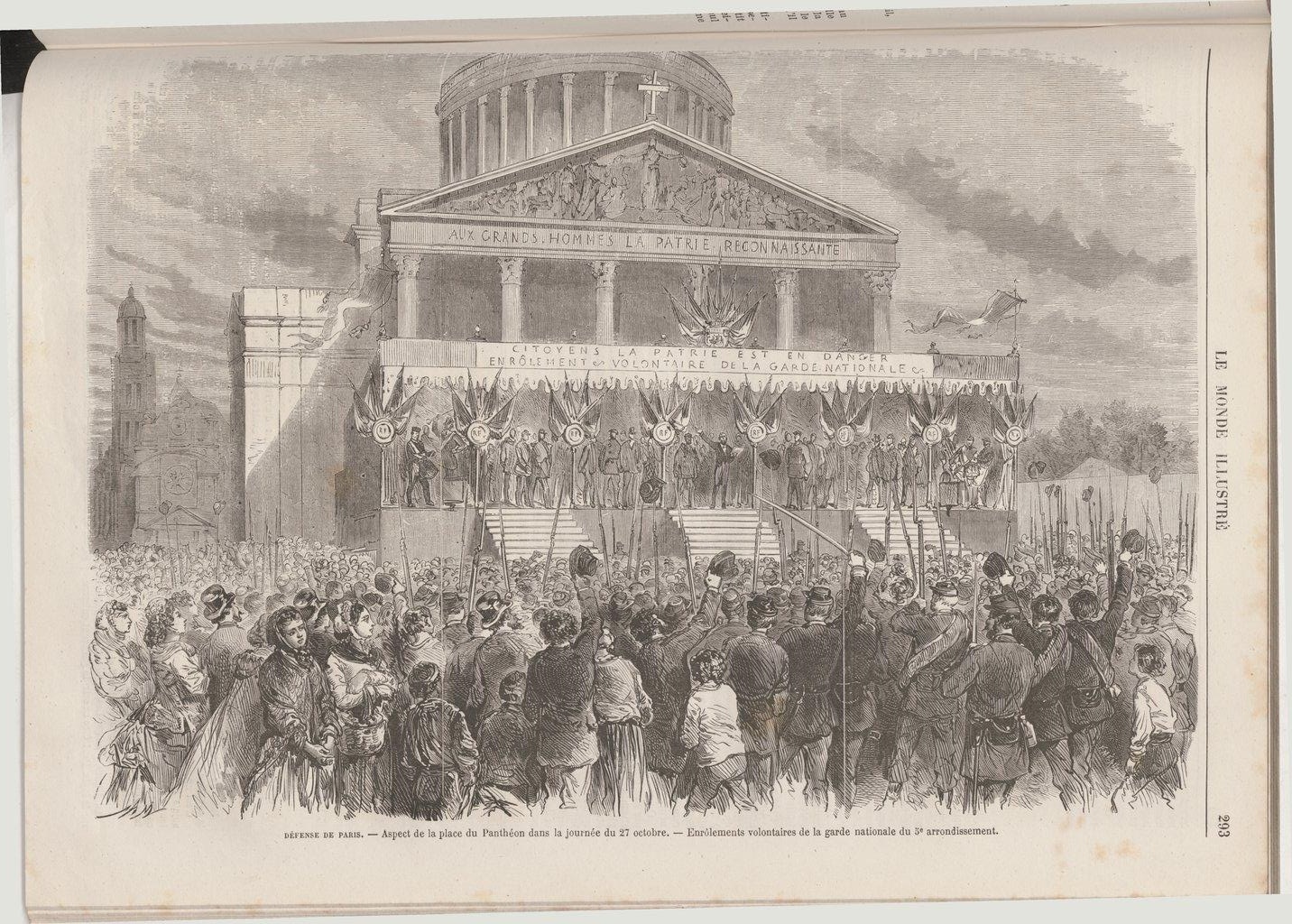 Among them were the “tirailleurs de la Seine” (sharpshooters of the Seine).This 115 man company was financed with 10.000 francs (~100.000 US$) by the merchant Constant-Leon Sauvage de la Martiniere and commanded by captain Dumas. There were a lot of artists in this company among which the painters Jules Frédéric Ballavoine , Etienne Prosper Berne-Bellecour, Gustave Jacquet, Alexandre-Louis Leloir , Eugène Leroux , James Tissot, and Jehan Georges Vibert. 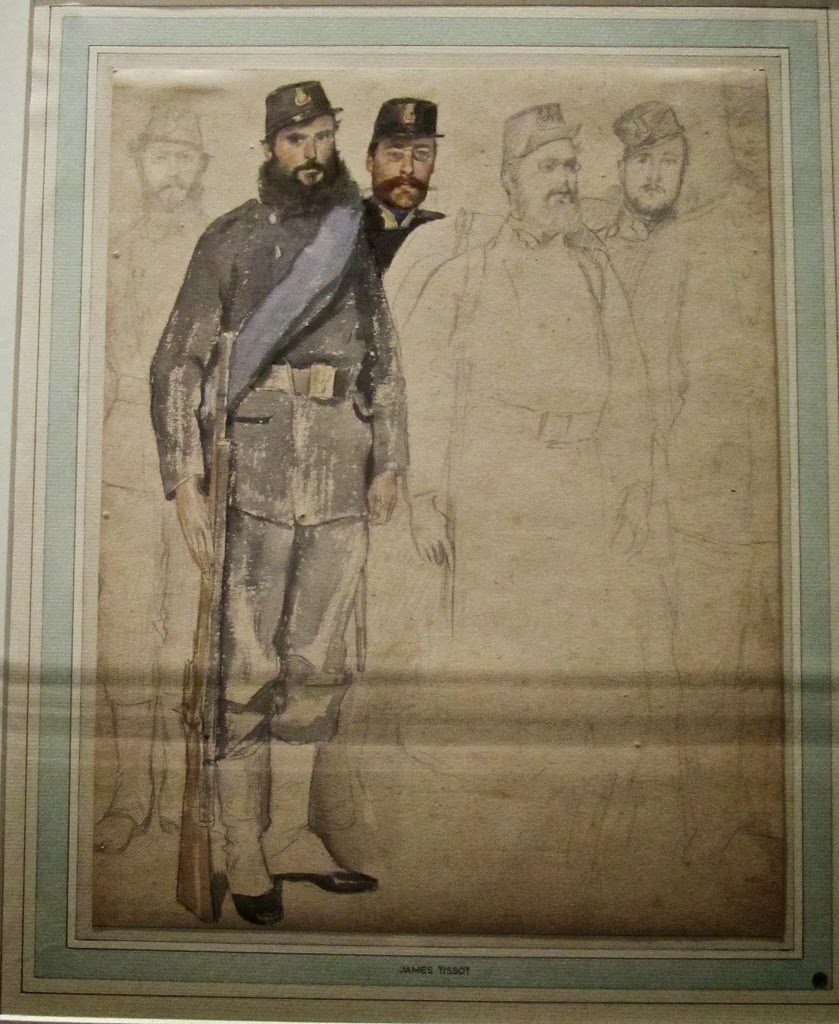 The correspondent of Le Monde Illustre (november 5,1870) wrote : “In this company were recruited some talented lawyers, artists who had proven themselves , all young men with a bright future who, when the Prussians advanced, dit not hesitate  to exchange criminal records, brush and chisel against a chassepot or rifle”. This so called chassepot was the new French army rifle (1866) which was an improvement of the Prussian rifle with a considerably longer firing range (1200 meter vs 600 meter).

In the meantime the French army outside Paris tried to organize and advance to Paris. Auguste Renoir joined a cavalry unit and was sent to Bordeaux but never made contact with the enemy. A friend of Edouard Manet, Frederic Bazille was less fortunate. Het participated in an attack near Paris and was killed.

The most famous battle of the tirailleurs de Seine in which 64 members of the company participated was the battle of Buzenval in october 21 1870 (as opposed to the second battle of Buzenval in 1871). Etienne Prosper Berne-Bellecour, member of the company, made a painting of the battle. The French troops tried to conquer the grounds around Malmaison including the castle of Buzenval. They took the castle but had to retreat when the Germans mobilized more troops. Heavy fighting took place at the so called Longboyau gate of the Buzenval castle. 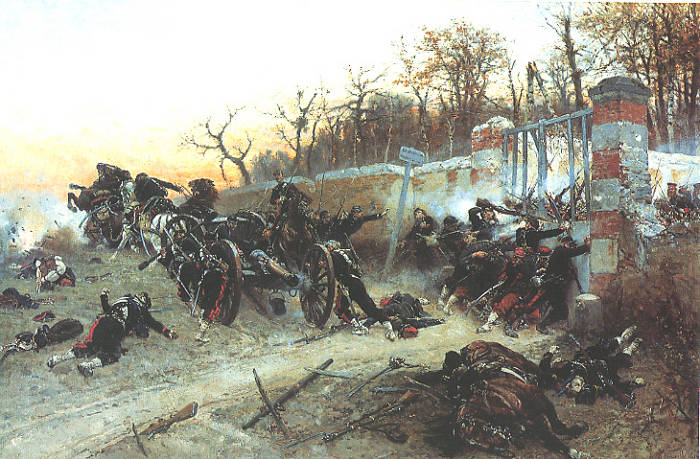 At the end of the battle the company had, according to the records of general Ducrot, lost 5 men and had 12 men wounded.  James Tissot witnessed the death of one of his comrades, the sculptor Cuvelier. He made a sketch of it later which was not appreciated by Edgar Degas, a close friend of Cuvelier. Other victims of this battle were Eugene Leroux who was seriously wounded at both legs and could not move despite help of his friend Gustave Jaquet and Jehan Georges Vibert who suffered a slight knee wound. For this Vibert was awarded the Légion d’Honneur and even became an Officier of the Légion d’Honneur in 1882. 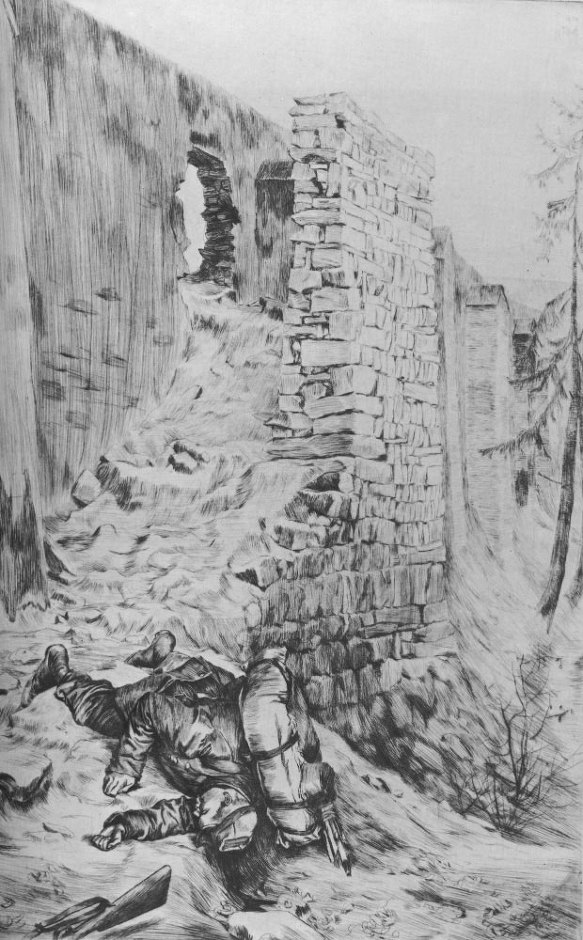 As the bitter winter passed in the besieged and isolated Paris (although some balloonflights were performed), and food became so scarce that rats and the zoo-elephants  were on the christmas menu of the restaurants, one of the last battles of the war was fought. On January 19, the day after Wilhelm I was proclaimed German Emperor in Versailles, the French did an outbreak in the direction of Versailles and again Buzenval castle was the decor of heavy fighting. This time another painter, Henri Regnault, was fatally wounded.

His death was immortalized by his friend Ernest Meissonier in his allegoric painting “the siege of Paris”, in which Regnault is depicted in the center, falling on his knees and leaning toward the woman with the lion-cape (Mme Meissonier). Although Regnault was exempted from military duty on account of his Prix de Rome award, he joined the National Guard.and he prepared for death in combat by attaching to his clothing a card with his name and contact details of his fiancee. Another artistic friend of him, composer Camille Saint-Saëns who also served in the National Guard, paid tribute to his death with  his Marche héroïque (1871). 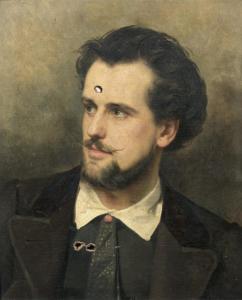 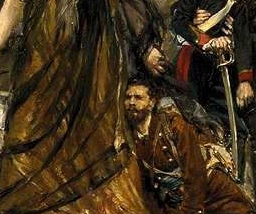 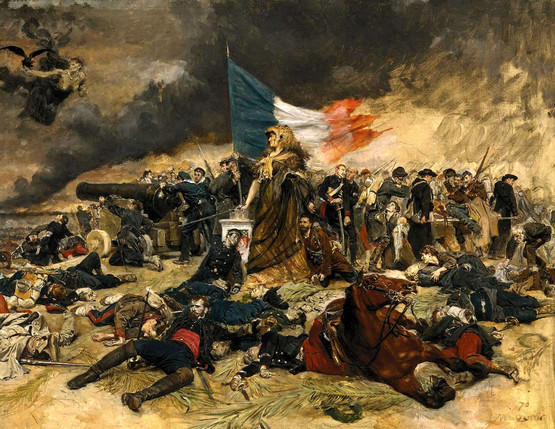 Although the “tirailleurs de la Seine” had the largest amount of artists enlisted, they were certainly not the only unit to have artists in their midst. Theophile Poilpot became a member of the mobile Seine unit and his friend Gustave Boulanger joined the National Guard. 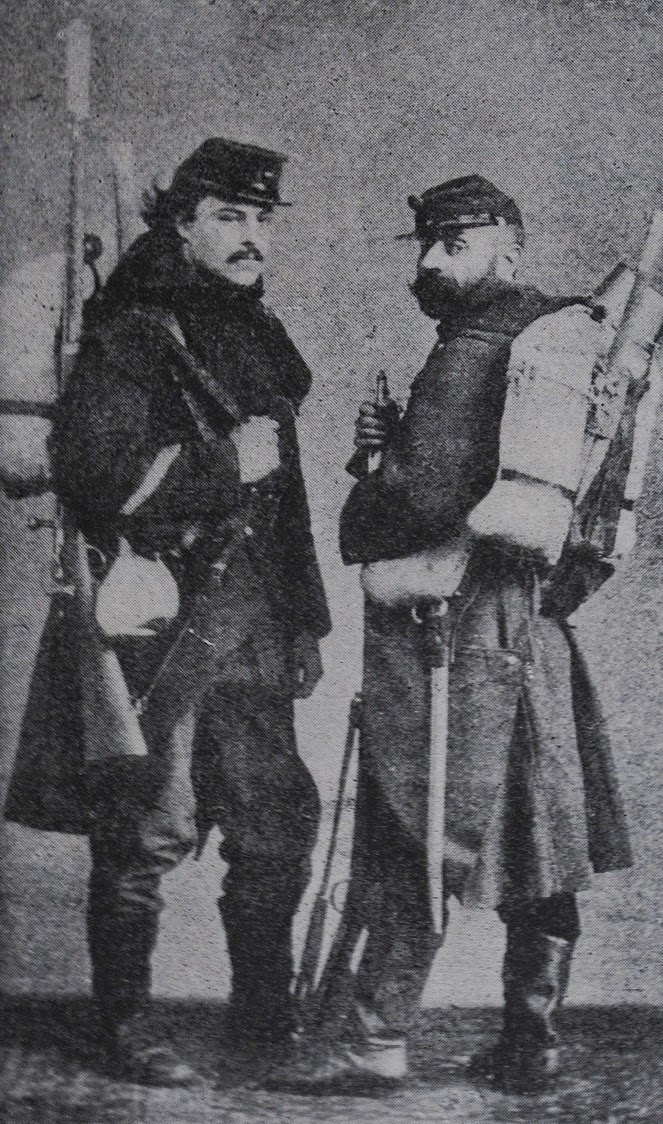 to the left Theophile Poilpot, sergeant of the 1th regiment mobile Seine Unit and to the right Gustave Boulanger in a national guard uniform

Other members of the National Guard were Edgar Degas, Edouard Manet and William Adolphe Bouguereau. Edgar Degas discovered with rifle training that his eyesight was not good enough to become an infantry-soldier and hence joined the artillery. His eye problems turned later out to become progressive and influence his style and subjects. Degas did not experience the battlefield like the tirailleurs de Seine as appears from this quote of a letter “Monsieur Degas has joined the artillery, and by his own account has not yet heard a cannon go off.  He is looking for an opportunity to hear that sound because he wants to know whether he can endure the detonation of his guns.”

Édouard Manet was also a gunner in the artillery of the National Guard, together with Degas.  He became a lieutenant.  At the start, he was on maneuvers with Degas for two hours a day in ankle-deep mud. He found this too demanding and was transferred to the general staff headquarters where he joined Ernest Meissonier among others. At the headquarters, Manet said, he could “be safe while being able to see everything.”

Bougereau was having a vacation in Brittany when the war started. He left his wife and three children in safety and returned to Paris alone . Although exempt from military duty on account of his age, he joined the National Guard, where he served as a simple soldier, standing guard on the fortifications.

The great military painter Edouard Detaille, also participated in the Franco-Prussian war and made a famous painting about a sleeping regiment of young recruits who are dreaming about a victorious revenge on the Germans. This painting became an inspiration for the new French generation and popular with the youth, as illustrated by Paul Legrand in 1897. The seeds were sowed for a war to come … 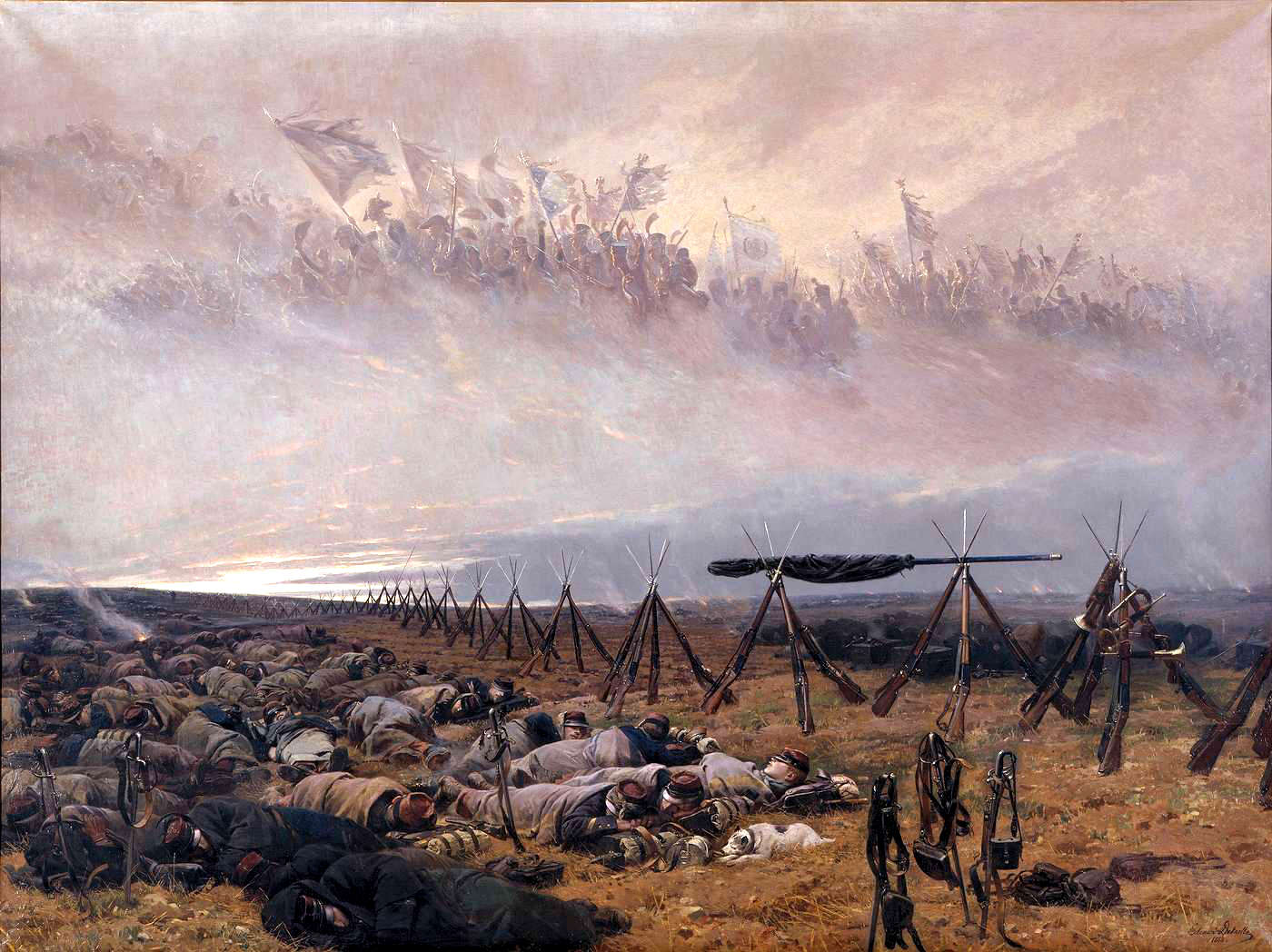