The center of the Russian Imperial Empire was Sint Petersburg with its academy. As in other countries, artists broke free and formed a separate society in 1863 called the Peredvizhniki (wanderers). From 1870 on they organized travelling art exhibitions to bring their art to the people in the provinces. 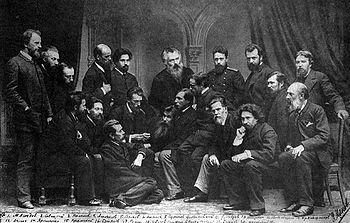 A famous participant of this wanderer movement was Ilya Repin. One of his most renowned works are the barge haulers. Repin was a productive painter who loved his country and painted national history, genrepaintings and biblical paintings.

One more obscure Russian painter, closely related to and participating in the expositions of the wanderers, was Vasily Vereschagin. He has lived a remarkable life of which some highlights are covered in the guided tour “traveller-artists 2” which I can highly recommend.

Another Russian painter who besides the academy in Moscow and St Petersburg also visited the Munich academy, is Ivan Shishkin. He is a master in the painting of forests, especially pine woods, and was nicknamed the Forest Tsar.

Although not strictly Russian, I will mention the Armenian painter Ivan Aivazovsky here, who visited the St Petersburg academy and became famous for his seascapes. His talents were discovered during his lifetime and he was awarded membership of five European academies and was appreciated by Turner and Delacroix.